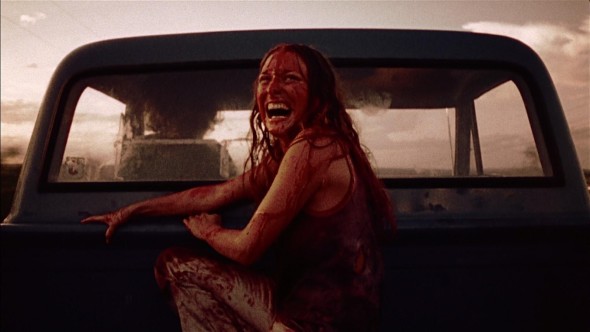 It’s summer time! Maybe you’ve gotten it into your head to pack up the family truckster and set off on an adventure, take a road trip? Well, we’re here to talk you out of it. Whether it’s Joy Ride or Wrong Turn, Brotherhood of Satan or Race with the Devil, or any one of the films on this list, if there is one thing our research has shown us, it’s that we’re staying safe at home this summer.

Baby faced C. Thomas Howell – still a star in 1986 – finds himself falling asleep behind the wheel as he drives a car from Chicago to San Diego. In a torrential downpour, he picks up a hitchhiker – the effortlessly terrifying Rutger Hauer.

First time director Robert Harmon does a nice job of ratcheting up tension by exploring the calm surrounding Howell’s shaken character: the roadside, the townies, the slumbering mountains on the horizon, and in particular, Hauer’s serene psychopath. The discrepancy fosters an anxiety in the audience, and though Howell’s crybaby driver Jim Halsey makes consistently idiotic decisions, he’s so convincingly innocent that we forgive him.

Steven Spielberg was just 25 years old when he directed this taut thriller about mysterious road rage.

Dennis Weaver stars as a salesman on a business road trip who finds himself terrorized by the driver of a big rig. Based on Richard Matheson’s short story that sprang from a real-life incident, the film shows young Spielberg’s filmmaking instincts were already razor sharp. He rachets the tension early and often, knowing that our fear for the life of the salesman becomes even greater when mixed with the frustration of not knowing why he is being targeted.

Originally produced as a TV movie of the week, Duel eventually received a limited theatrical run, and it is flush with all the elements of a winning big screen pulse-pounder.

Wes Craven’s original Hills – cheaply made and poorly acted – is a surprisingly memorable, and even more surprisingly alarming flick. Craven’s early career is marked by a contempt for both characters and audience, and his first two horror films ignored taboos, mistreating everyone on screen and in the theater. In the style of Deliverance meets Mad Max, Hills was an exercise in pushing the envelope, and it owes what lasting popularity it has to its shocking violence and Michael Berryman’s nightmarish mug.

A suburban American family on a road trip takes an ill-advised “short cut” through this New Mexican desert to find themselves the targets of a family of inbred mutants’ blood lust.

The Hills Have Eyes – Craven’s original or Alexandre Aja’s 2006 reboot – is not for the squeamish. People are raped, burned alive, eaten alive, eaten dead, and generally ill-treated.

In fact, Craven’s greatest triumph is in creating tension via a plot device so unreasonably gruesome no audience would believe a film could go through with it. The freaks kidnap a baby with plans to eat her. But by systematically crushing taboo after taboo, the unthinkable becomes plausible, and the audience grows to fear that the baby will actually be eaten. It’s not the kind of accomplishment you’d want to share with your mom, but in terms of genre control, it is pretty good.

Some of the best scares in film have come as the reaction to urbanites’ fear of losing our tentative grasp on our own link in the food chain once we find ourselves in the middle of nowhere. With Wolf Creek, it’s as if writer/director Greg McLean looked at American filmmakers’ preoccupation with backwoods thrillers and scoffed, in his best Mick Dundee, “That’s not the middle of nowhere. This is the middle of nowhere.” McLean explores the isolated beauty of this vast, empty Australian middle with spectacularly creepy results.

Using only digital cameras to enhance an ultra-naturalistic style, McLean’s happy backpackers find themselves immobile outside Wolf Creek National Park when their car stops running. As luck would have it, friendly bushman Mick Taylor (a startlingly horrifying, utterly perfect John Jarratt) drives up offering a tow back to his camp, where he promises to fix the vehicle.

Not everyone considers Tobe Hooper’s 1974 original The Texas Chainsaw Massacre a classic. Those people are wrong. Perhaps even stupid.

Franklin Hardesty, his pretty sister Sally, and a few other friends head out to Grampa Hardesty’s final resting place after hearing the news of some Texas cemeteries being grave robbed. They pick up a hitchhiker, played with glorious insanity by Edwin Neal. The Hitchhiker is part of a family of cannibals, and the youths will eventually stumble upon their digs.

Hooper sidestepped all the horror gimmicks audiences had grown accustomed to – a spooky score that let you know when to grow tense, shadowy interiors that predicted oncoming scares – and instead shot guerilla-style in broad daylight, outdoors, with no score at all. You just couldn’t predict what was coming. He was after an entirely different kind of tension. He dashes your expectations, making you uncomfortable, as if you have no idea what you could be in for. As if, in watching this film, you yourself are in more danger than you’d predicted.