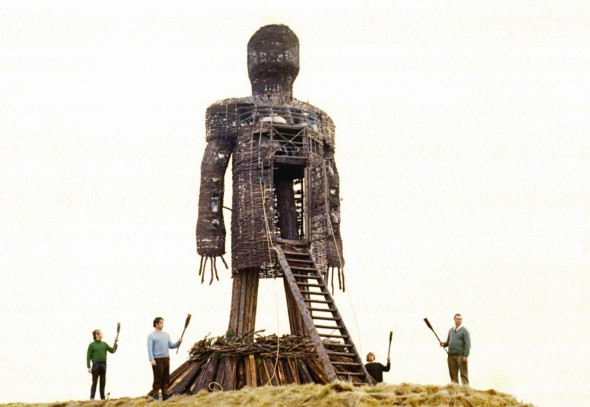 Everybody has their rituals, and that’s all fine and dandy. But we aren’t looking for fine and dandy, are we? Hell no – we’re looking for the kind of rituals that generally includes goats heads and/or black candles and/or virgins and/or special meat preparation.

Where will we find these? In some great horror movies. Check it.

Never has the line “Thank you” had a weirder effect than in the genre bending adventure Kill List.

Hitman Jay (a volcanic Neil Maskell) is wary to take another job after the botched Kiev assignment, but his bank account is empty and his wife Shel (an also eruptive MyAnna Buring) has become vocally impatient about carrying the financial load.

Without ever losing that gritty, indie sensibility, Ben Wheatley’s fascinating film begins a slide in Act 2 from crime drama toward macabre thriller. You spend the balance of the film’s brisk 95 minutes actively puzzling out clues, ambiguities and oddities.

Everything builds, unsettlingly, to a climactic ritual you won’t see coming.

But maybe Howie’s playing right into something he doesn’t understand – and what would the people of Summerisle do if he didn’t play along? The ritual would be blown!

Hardy and his cast have wicked fun with Anthony Shaffer’s sly screenplay, no one more so than the ever-glorious Christopher Lee. Oh, that saucy baritone!

In a quiet opening sequence, a man dies in a mall. This is a family patriarch and his passing leaves the desperately poor family in shambles. An internal power struggle begins to determine the member most suited to take over as the head of the household, and therefore, there is some conflict and competition – however reluctant – over who will handle the principal task of the patriarch: that of putting meat on the table.

We’re never privy to the particulars – giving the whole affair a feel of authenticity – but adding to the family’s crisis is the impending Ritual, which apparently involves a deadline and some specific meat preparations.

This is one you may need to prepare yourself for. Equal parts orphanage ghost story, suburban revenge fantasy, and medical experimentation horror flick, the whole of Martyrs is a brutal tale that is hard to watch, hard to turn away from, and worth the effort.

Mining the heartbreaking loneliness of abandoned, damaged children, the film follows the profound relationship between Lucie (Mylene Jampanoi) and the only friend she will ever have, an undeterrably loving Anna (Morjana Alaoui).

The third act offers the most abrupt change of course as well as tone. Here is where the ritual begins – it began long ago, but the subject wasn’t quite right. Though it feels like an abrupt shift, it ends up a gruesome but inevitable conclusion.

But thanks to an intricate and nuanced screenplay adapted by William Peter Blatty from his own novel, the film boasts any number of flawed characters struggling to find faith and to do what’s right in this situation.

So was Friedkin, the director who balanced every scene to expose its divinity and warts, and to quietly build tension. The titular ritual was simply the climax of a film filled with rituals, big and small, Catholic and non-religious, that we use to keep us clean and safe.

← Girl with All the Gifts
Rocket Men →
Scroll Up