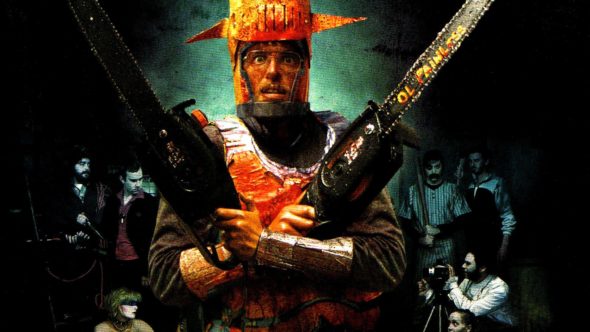 So, there’s this one set of movies you may or may not be aware of about a guy with a William Shatner fixation just trying to get home in time for Halloween. You may have heard of it.

Here’s the thing, there are also other Halloween-themed movies you could watch this holiday if you’re so inclined. Loads of them. And while we feel like you probably know which Michael Meyers movies to skip (5 & 8), which to love (1, duh), and which to watch for the ironic enjoyment (6—we’re looking at you, Paul Rudd!), you might need some direction outside that series. So, here are our five favorite non-franchise Halloween horror movies.

It’s Halloween night in the late Eighties and a bunch of high school kids decides to go hang out at Angela’s party because, as the resident goth girl, “Halloween is like Christmas to Angela.”

Where’s the party? At the old, abandoned funeral parlor built over sacred land above some kind of demonic water source. Natch.

Do not be confused – Night of the Demons is not exactly recommended viewing. It’s terrible. Once you get past its dirt-cheap sets and TV-level staging, you’ll notice that the film boasts among the most stilted and cardboard dialogue of any film from the Aquanet decade.

But Angela (Amelia “Mimi” Kinkade) looks cool. Every goth chick— Fairuza Balk’s Nancy Downs from The Craft in particular—owes Angela a little respect. And professional dancer Kinkade does the demonic transformation justice. The acting is atrocious—all of it— but the film boasts a campy, nostalgic, oh-so-80s quality, and we never disagree with Bauhaus on a soundtrack.

Jeremy Saulnier is a filmmaker worth watching. Murder Party is not the near-masterpiece of Blue Ruin or Green Room, but it is a savvy, funny, fun change of pace.

Chris Sharp plays lonesome loser Christopher. Alone with his selfish cat on Halloween night, he decides to follow a whim and hit the party advertised on a flier. A “Murder Party.”

What Saulnier pieces together could have dripped with condescending judgment, as a group of insecure art students plot to kill the poor guy as a piece of art that will impress Alexander (Sandy Barnett) enough to nab them the grant Alexander keeps lording over them.

The comedy is more self-referential and human than snide, simultaneously mocking and empathizing with the group of artists as well as their would-be victim.

Funny, tender, biting and often quite bloody and energetic, Murder Party does not suggest the style of film to come from Saulnier, but it predicts a filmmaker who knows what he’s doing.

Ginger and Bridget, outcasts in the wasteland of Canadian suburbia, cling to each other and reject/loathe high school (a feeling that high school in general returns).

On the evening of Ginger’s first period, she’s bitten by a werewolf. Writer Karen Walton cares not for subtlety: the curse, get it? It turns out, lycanthropy makes for a pretty vivid metaphor for puberty.

This turn of events proves especially provocative and appropriate for a film that upends many mainstay female cliches. Walton’s wickedly humorous script stays in your face with the metaphors, successfully building an entire film on clever turns of phrase, puns, and analogies, stirring up the kind of hysteria that surrounds puberty, sex, reputations, body hair, and one’s own helplessness to these very elements.

A well-timed Halloween party allows Ginger to display her new look and skills in as insightful a high school horror film as you’ll find, peppered equally with dark humor and gore.

Who wants a little romance? How about the tale of a wallflower, the blossom of new love, the efficient use of veterinary surgical equipment, and a good sized freezer?

May’s vulnerability is painful yet beautiful to watch, and it’s impossible not to hope that cool outsider Adam is telling the truth when he reassures her, “I like weird.”

McKee’s film pulls no punches, mining awkward moments until they’re almost unendurable and spilling plenty of blood when the time is right—on Halloween night, of course.

He deftly leads us from the sunny “anything could happen” first act through a darker, edgier coming of age middle, and finally to a carnage-laden climax that feels sad, satisfying, and somehow inevitable.