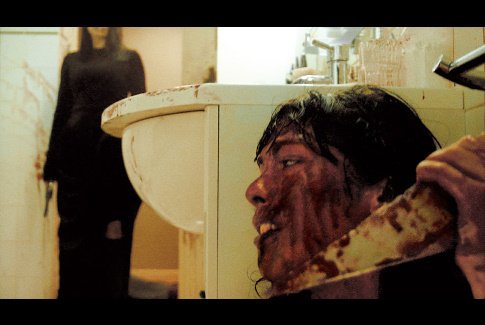 French horror films are not for the squeamish. In particular, the French languge output in the first decade of this century boasted some of the most extreme and well-crafted horror available anywhere. Films like Sheitan, Trouble Every Day, Frontiers, High Tension and many others mark an era that may never be bettered. In celebration of this week’s live Fright Club, we walk through some of the best in best French language horror films.

Holy shit. Sarah lost her husband in a car crash some months back, and now, on the eve of Christmas, she sits, enormous, uncomfortable, and melancholy about the whole business. Were this an American film, the tale may end shortly after Sarah’s Christmas Eve  peril makes the expectant mom realize just how much she loves, wants, and seeks to protect her unborn baby. But French horror films are different. This is study in tension wherein one woman (the incomparable Beatrice Dalle) will do whatever it takes, with whatever utensils are available, to get at the baby still firmly inside another woman’s body.

Brisk, effective and terrifying, Them is among the most impressive horror flicks to rely on the savagery of adolescent boredom as its central conceit. Writers/directors/Frenchmen David Moreau and Xavier Palud offer a lean, unapologetic, tightly conceived thriller that never lets up. Creepy noises, hooded figures, sadistic children and the chaos that entails – Them sets up a fresh and mean cat and mouse game that pulls you in immediately and leaves you unsettled.

Gaspar Noe is perhaps the most notorious French filmmaker working in the genre, and Irreversible is his most notorious effort. Filmed in reverse chronological order and featuring two famously brutal sequences, Noe succeeds in both punishing his viewers and reminding them of life’s simple beauty. There’s no denying the intelligence of the script, the aptitude of the director, or the absolute brilliance of Monica Bellucci in an incredibly demanding role.

This import plays like three separate films: orphanage ghost story, suburban revenge fantasy, and medical experimentation horror. The first 2 fit together better than the last, but the whole is a brutal tale that is hard to watch, hard to turn away from, and worth the effort.

A paranoid fantasy about the link between progress and emasculation, The Ordeal sees a timid singer stuck in the wilds of Belgium after his van breaks down. With the darkest imaginable humor, the film looks like what might have happened had David Lynch directed Deliverence in French. As Marc (a pitch perfect Laurent Lucas) awaits aid, he begins to recognize the hell he’s stumbled into. Unfortunately for Marc, salvation’s even worse. The whole film boasts an uneasy, “What next?” quality. It also provides a European image of a terror that’s plagued American filmmakers for generations: the more we embrace progress, the further we get from that primal hunter/gatherer who knew how to survive. This film is a profoundly uncomfortable, deeply disturbing, unsettlingly humorous freakshow that must be seen to be believed.

Join us the 4th Saturday of every month for Fright Club Live, as we unspool a horror gem at Drexel Theater. Join the club!