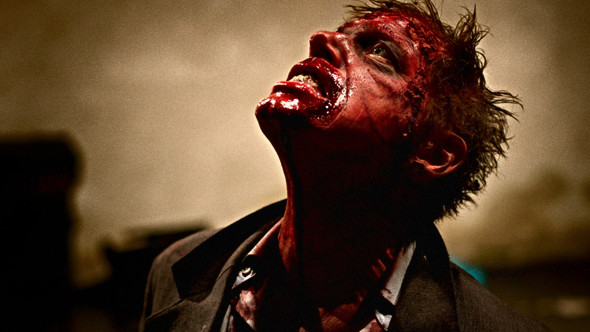 How is it even possible that we’ve recorded 109 Fright Club podcasts and we have not covered German horror yet?! It’s high time we remedy that situation, and we do so with the help of Fright Clubber #1, John Dean.

German has an incredible history in this genre, from some of the earliest and most memorable horror films through the contemporary indie gems that will become the next generation of classics. We talk through the five best – and a bunch of others you should really see.

Why does this film work?

Michael (Michael Fruith) arrives in Berlin to visit his recently-ex girlfriend. She’s not home. While he waits in her apartment, Berlin falls prey to the zombipocalypse.

It’s actually the rage virus, and it’s how well Rammbock plays like the Berlin equivalent of 28 Days Later or Quarantine that helps it excel.

Michael finds himself trapped inside his ex’s apartment building, scheming survival tricks with the plumber hiding out with him. The team work, strategy, human kindness and pathos all combine with really solid acting and more than a few well-choreographed action bits to help this film more than transcend familiar tropes.

You love these guys. You believe in them, and the idea that they won’t make it through this is dreadful. Director/co-writer Marvin Kren, blessed with a stellar cast, works your sympathies and your nerves.

Jakob, an unintimidating police officer in a remote German berg, has been charged with eliminating the wolf that’s frightening villagers. Moved by compassion or longing, Jakob can’t quite make himself accomplish his task – a fact that villagers and his commanding officer find predictably soft. But a chance encounter with a wild-eyed stranger wearing a dress and carrying a samurai sword clarifies that the wolf is probably not the villagers’ – or Jakob’s – biggest problem.

Pit Bukowski cuts a peculiar but creepy figure as the Samurai – kind of a cross between Iggy Pop and Ted Levine (The Silence of the Lambs’s Buffalo Bill). His raw sexuality offers the perfect counterpoint to the repressed Jakob (Michel Diercks).

It’s a beautiful film about embracing or forever suppressing your inner monster, but this is no ordinary Jekyll and Hyde retread. Kleinert’s vision is steeped in sexuality and sexual identity, giving it a fascinating relevance often missing in this style of horror film.

Franz and Fiala owe a great debt to an older American film, but to name it would be to give far too much away, and the less you know about Goodnight Mommy, the better.

The filmmakers’ graceful storytelling leads you down one path before utterly upending everything you think you know. They never spoon feed you information, depending instead on your astute observation – a refreshing approach in this genre.

The film is going to go where you don’t expect it to go, even if you expect you’ve uncovered its secrets.

A family pulls into their vacation lake home, and are quickly bothered by two young men in white gloves. Things, to put it mildly, deteriorate.

Writer/director Michael Haneke begins this nerve wracking exercise by treading tensions created through etiquette, toying with subtle social mores and yet building dread so deftly, so authentically, that you begin to clench your teeth long before the first act of true violence.

His teen thugs’ calm, bemused sadism leaves you both indignant and terrified as they put the family through a series of horrifying games. And several times, they (and Haneke) remind us that we are participating in this ugliness, too, as we’ve tuned in to see the family suffer. Sure, we root for the innocent to prevail, but we came into this with the specific intention of seeing harm come to them. So, the villains rather insist that we play, too.

Once Haneke’s establishes that he’ll break the 4th wall, the director chooses – in a particularly famous scene that will likely determine your overall view of the film – to play games with us as well.

But it is the villains who sell the premise. With actors Arno Frisch and Frank Giering, the bored sadism that wafts from these kids is seriously unsettling, as, in turn, is the film.