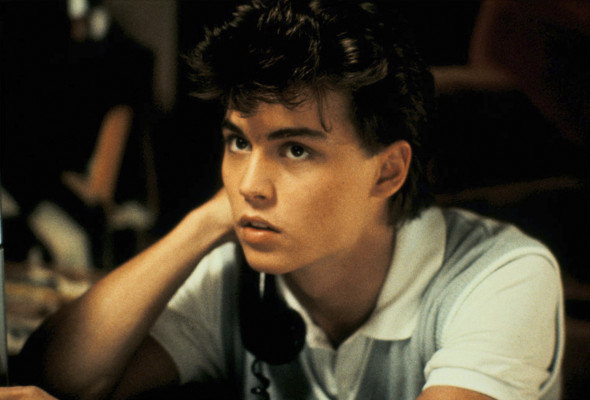 We spend a lot of time examining skeletons in the closets of major celebrities – the god-awful horror movies where they got their start. But today, we celebrate that handful of aspiring actors who get their start in really decent horror movies – some you’ve probably seen, some you may not have. Before these guys were stars, they lucked into a good one, so check them out!

This quasi-found footage style gem is hardly flawless, but it creeps around dark ideas and delivers some nasty moments. Five youngsters volunteer to live Real World-style for a year, being filmed for an online channel contest. If they all stay for the full year, they win a million dollars. If anyone leaves, they all lose the cash.

Co-written by James Watkins, who appears again on this countdown, the story remains claustrophobic until the introduction of one handsome, lost hiker (Bradley Cooper) who’s not what he seems.

This is just Cooper’s second feature, releasing shortly after Wet Hot American Summer, and his onscreen presence breathes life to an intentionally drab atmosphere. His character is a catalyst for horrors aplenty, but his performance offers a glimpse of good things to come.

Johnny Depp made his film debut in Wes Craven’s groundbreaking nightmare. Craven said in interviews that he almost didn’t cast the future heartthrob, thinking he was too pasty and weird for the role, but his daughter’s swooning convinced him.

Depp plays Glen, boyfriend to bossy Nancy (Heather Langenkamp), epicenter of Freddy Krueger’s revenge from beyond. Though his performance doesn’t necessarily predict an Oscar-nominated future, he delivers his lines more thoughtfully than most of the cast. Plus, what a death scene!

This is another underseen flick, boasting some solid performances that make the most of decent, twisty writing in a identity reversal horror story. In his second feature, Chris Hemsworth is half of one of the three couples traveling through Hawaii that get mixed up in a mystery surrounding serial killers. The ever-versatile Steve Zahn plays beautifully against type, while Timothy Olyphant offers another hard-edged but fun performance.

For the film to work, you need to always be guessing as to who may or may not be the killer. Hemsworth’s performance is one you revisit, is-he-or-isn’t-he style. He’s menacing from his first appearance, but shows some of the versatility that would help him climb quickly out of supporting roles.

Again with James Watkins! He writes and directs this brutal and brilliant culture clash, but his real talent may be in casting. Michael Fassbender proves here what everyone knows by now – he is a brilliant, limitless actor. His Steve takes girlfriend Jenny (Kelly Reilly – also excellent) to an old quarry about to be revitalized as an upscale community – to the distaste of the low scale community currently roaming its beaches.

Fassbender plumbs his character’s depths. By turns smug and cowardly, superior and kind hearted, Steve is a real human being – the kind rarely seen in a horror film. And while Reilly’s strength is another uniqueness that makes the film stand out, the introduction to Jack O’Connell’s evicerating talent as alpha thug is no doubt what makes Eden Lake so painfully memorable.

He’s helped, of course, by director Mary Harron’s faultless direction – effortlessly balancing the blackest of comedy with inspired bloodletting. So many scenes are iconic by this point, all of them involving Bale as the beautiful shell of a human being, filled mostly with vacuous musical taste and a lust for blood.

Listen to the whole conversation over on FRIGHT CLUB!