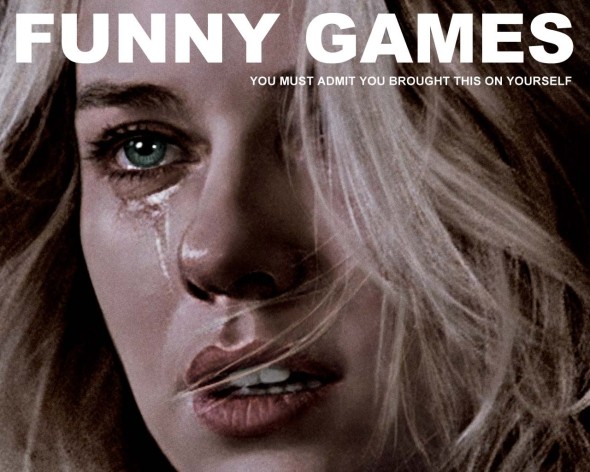 Michael Haneke, an amazing creator of both tension and soul-touching drama, continues to prove he is a filmmaking genius. From the creepy, mysterious Cache (Hidden), to The White Ribbon – his incandescent and terrifying pre-WWII  masterpiece – to last year’s Oscar-nominated Amour, everything Haneke has done deserves repeated viewing. This is a bit easier with Funny Games, as he made it twice.

A family pulls into their vacation lake home, and are quickly bothered by two young men in white gloves. Things, to put it mildly, deteriorate.

Asks the victimized father, “Why are you doing this?”

Replies the villain, “Why not?”

Haneke is hardly the first filmmaker to use adolescent boredom as a source of frightening possibility. Kubrick mined Anthony Burgess’s similar theme to icy perfection in A Clockwork Orange, perhaps the definitive work on the topic, but Haneke’s material refuses to follow conventions.

His teen thugs’ calm, bemused sadism leaves you both indignant and terrified as they put the family through a series of horrifying games. And several times, they (and Haneke) remind us that we are participating in this ugliness, too, as we’ve tuned in to see the family suffer. Sure, we root for the innocent to prevail, but we came into this with the specific intention of seeing harm come to them. So, the villains rather insist that we play, too.

Once Haneke’s establishes that he’ll break the 4th wall, the director chooses – in a particularly famous scene that will likely determine your overall view of the film – to play games with us as well.

His English language remake is a shot for shot repeat of the German language original. In both films, the performances are meticulous, realistic, unnerving. The family is sympathetic, but not overbearingly so. They’re real.

But in both films, it is the villains who sell the premise. Whether the German actors Arno Frisch and Frank Giering or the Americans Brady Corbet and Michael Pitt, the bored sadism that wafts from these kids is seriously unsettling, as, in turn, is each film.

← A Scary Movie a Day All Through October. Day 6: The Loved Ones
SciFi of Significance →
Scroll Up