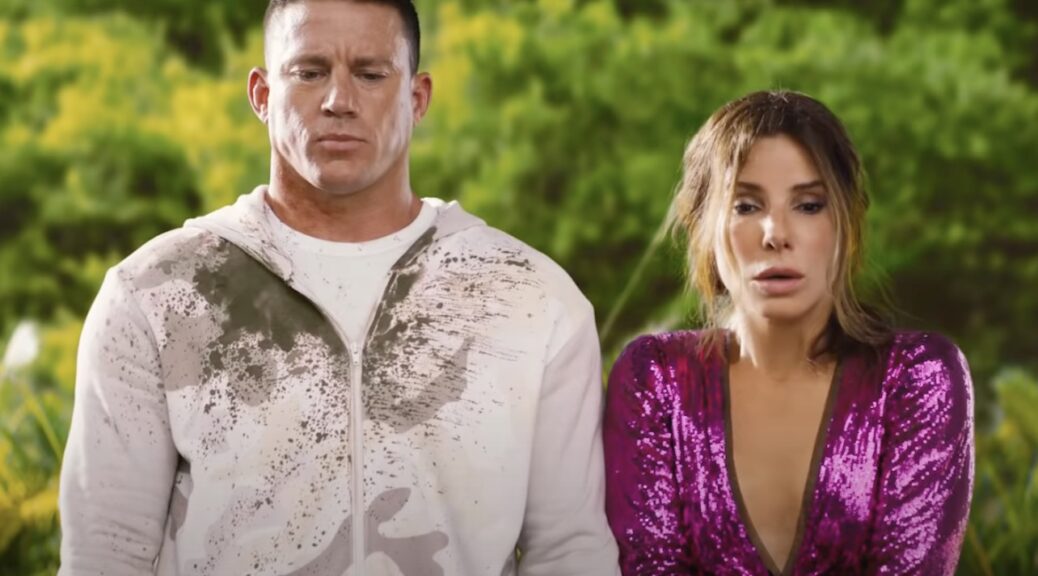 A romance novelist who’s really a bit of a hermit becomes a reluctant adventurer looking for legendary jewels in a far-off land, with a roguishly handsome man—part hero, part heartthrob—at her side.

No, it isn’t Romancing the Stone. It isn’t even Jewel of the Nile. Aaron and Adam Nee’s romantic adventure comedy The Lost City offers less adventure, more screwball comedy. And more sequins.

Sandra Bullock is Loretta Sage, whose romance novels are known less for their anthropological mysteries than their hunky hero. That hero has been depicted over many book covers by Alan (Channing Tatum).

Promoting their latest effort, The Lost City of D, Loretta gets nabbed by a wealthy villain (Daniel Radcliffe, playing delightfully against type), who believes she can decipher a map leading to untold riches.

The real gem in this film is Brad Pitt in an extended cameo as the tracker hired to find Loretta. The Oscar winner and veteran leading man is just so much fun when his only goal is to be funny, and in this movie, he’s a riot. (It helps that he gets to deliver the film’s single best line.)

Bullock and Tatum are both solid comic performers, but neither is given much to work with in this odd couple romance. A grieving widow given up on love, Loretta doesn’t offer Bullock a lot of room for hilarity. Instead, she becomes a rather dour anchor for the project.

Tatum’s dunderheaded beefcake is appealing enough, but can’t quite keep the film afloat. A side plot featuring Da-Vine Joy Randolph (Dolemite Is My Name) feels like filler, which this 2-hour film did not need.

There are some chuckles, especially when Pitt’s onscreen. Bullock and Tatum share enough chemistry, deliver physical comedy well enough, and generate enough charm between them to keep the breezy entertainment enjoyable.

The Lost City offers pretty, lightweight fun, not unlike a romance novel.