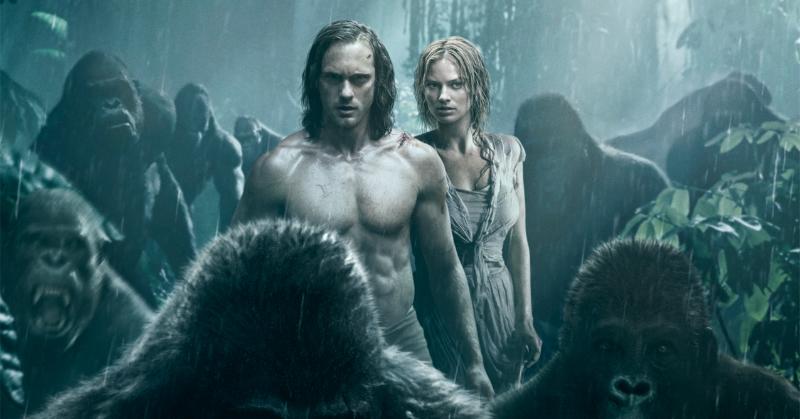 The Legend of Tarzan

Me Tarzan. You Jane?

No, this apeman has a slightly larger vocabulary.

You’ll hear that famous phrase in The Legend of Tarzan, but only for ironic purposes. This new reboot takes its cue from recent superhero films that have embraced the darker side of their legend.

We drop in on Tarzan (Alexander Skarsgard) in the late 1880s, years after his return to Greystoke Manor and the name John Clayton, as he’s living the aristocratic life with wife Jane (Margot Robbie) in a London mansion full of servants. Flashback segments do fill us in on the couple’s jungle past, but credit screenwriters Craig Brewer and Adam Cozad with a welcome pivot from the usual origin story formula.

Clayton is called back to the wilds of the Congo thanks to a devious plan from Leon Rom (Christoph Waltz), special envoy to Belgian King Leopold. Rom can deliver a fortune in diamonds to his King, but only if he can deliver Tarzan to a Congolese chieftain (Djimon Hounsou) looking to settle an old score.

So John and Jane head back “home,” with U.S. envoy George Washington Williams (Samuel L. Jackson) in tow, but when Rom puts his kidnapping plan in motion, Tarzan’s particular set of skills come out to play.

Director David Yates, who guided the Harry Potter film series to an epic conclusion, keeps his camera fluid, his landscapes beautifully panoramic and the action frequently thrilling.  Yes, it gets a bit silly and a bit more anachronistic, but Yates brings an ambitious scope to this modern Tarzan, with a respectable side of social conscience even when it panders.

Skarsgard’s chiseled physique certainly looks the part, and his somewhat robotic lack of range serves him well here. Robbie provides plenty of spunk, but her Victorian-era Jane could have just as easily beamed down from last Halloween. As for their chemistry…hey, those CGI jungle animals look fantastic!

It probably won’t set the stage for a string of blockbuster sequels – and to its credit, isn’t trying to – but for most of its nearly two hours, this new Tarzan really swings.