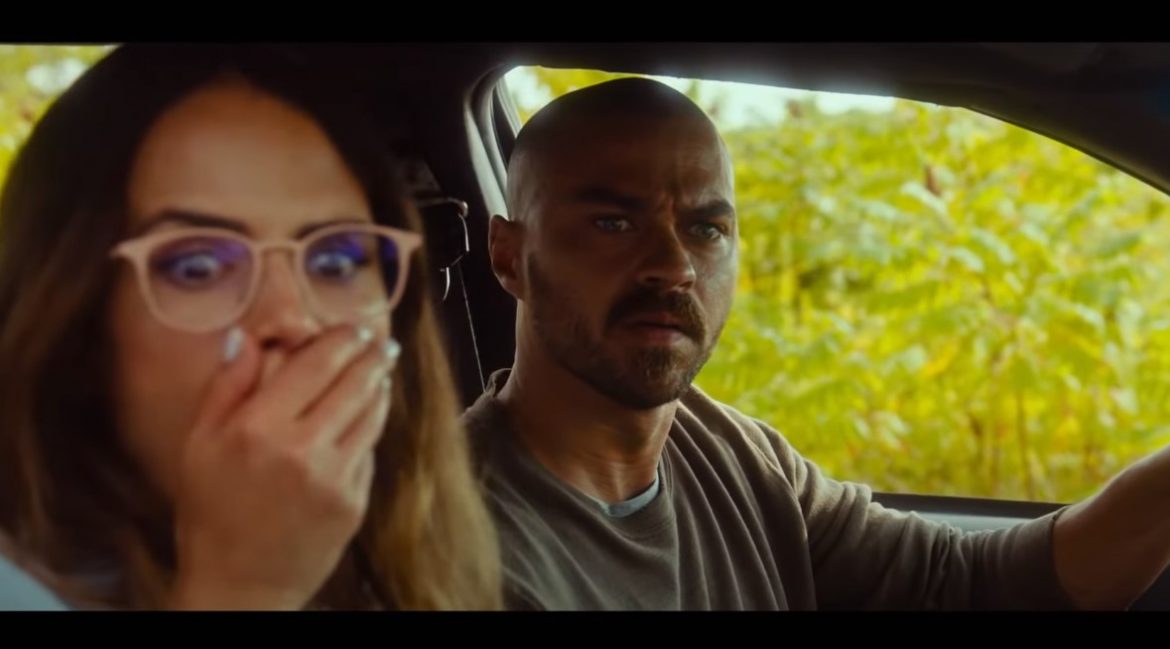 The last time I saw Jesse Williams get into a car on a road trip to horror, the journey delivered one of the most fun flicks of 2011, Cabin in the Woods.

Though writer’s block is keeping him from finishing the final installment, Todd hits the road with his publisher Ezra (Baruchel), assistant Aurora (Niahm Wilson), and girlfriend Kathy, played by Jordana Brewster. (Brewster also starred in a road trip to hell—for character and viewer—with the 2006’s Texas Chainsaw Massacre: The Beginning.)

Their goal is to visit the landmarks associated with the comic’s inspiration, the gruesome serial killer dubbed the I-90 killer who terrorized a stretch of highway from 1987 – 1991. Todd and Ezra hope to drum up some publicity for their comic con appearances. Kathy is researching her own related project, a nonfiction and victim-centric book about the same killer.

The film lands on ground fertile for horror examination. Most interesting and timely is the conversation around perspective. Are we beyond the point as a society where we make the serial killer our protagonist when we can instead take the point of view of the victim? (The popularity of the book and series I’ll Be Gone in the Dark suggests that we may be.)

Too bad the film relegates this conversation to a single argument: men create horror and women hate that; meanwhile, women create something more wholesome. (Counterpoint: much of the best horror of the last decade was made by women, and if it’s gruesome you want, please see Julia Ducournau’s fantastic 2016 rumination on adolescence and meat, Raw.)

The film does boast moments of provocative carnage, plus flashes of intriguing content. Rather than the traditional creepiness inspired by the Midwest rural route gas station—the isolated community somehow suggesting incest and cannibalism without every directly saying so—Baruchel conjures the far more realistic and modern blight of meth to achieve the same unhealthy atmosphere.

Never a particularly compelling presence, Williams lacks the gravitas to shoulder the suffering artist schtick and Brewster’s presence doesn’t elevate the tensions. Both Baruchel (an outstanding purveyor of nerdy support in any cast) and the tenderly engaging Wilson offset this lack of chemistry in their brief screen time, but it’s not enough.

Random Acts of Violence could have been an interesting indictment of the true crime phenomenon. It might have been an intriguing entry into the Writer’s Block Turns Horrific family (of which The Shining is patriarch). Instead, it’s a mainly competent but frequently lazy flick with gore to spare and some fun animations, but it could have been a lot more.