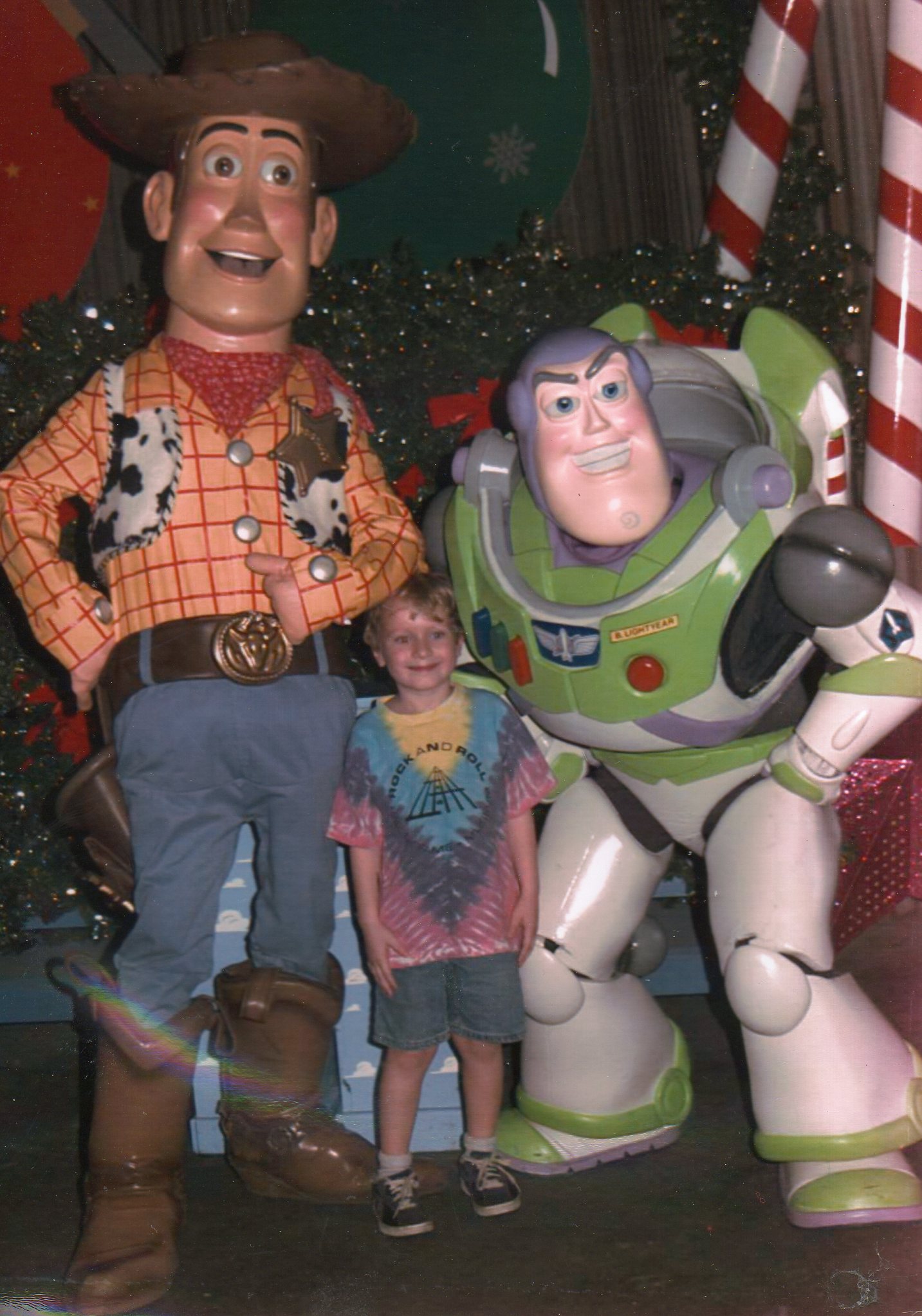 Donovan Riley turns 21 today.  Well, that can’t even be correct. Wait…March 12…it is! Against all logic, it is actually our boy’s 21st birthday. Holy cow! Well, while we sob quietly, enjoy a list of our fictitious DRW Turns 21 Movie Marathon, where we offer a quick glimpse at how those 21 years were spent.

Not even two years old, Riley would see the trailer on TV and shout “Rawr!” at the screen, so we figured The Lion King would be a fine choice for his first big screen adventure.  Is 18 months too young for a theatrical experience? Maybe for the rest of the audience, but we were ready to challenge them. That’s the kind of parents we are. Turns out, he was all about it, and it set the stage for the game-changer to come next.

It’s hard to put into words how much the original Toy Story changed our world. Beyond the multiple viewings, toys, bedsheets, posters, etc., Buzz, Woody and company were ever-present in our young boy’s mind.  It was a great movie, so we really didn’t mind the infatuation. He was moved, and he wanted to preach the gospel…which he frequently did by approaching random strangers in Kroger or Target with a simple query, “Have you seen THE SHOW?”

We went from a classic to an…ugh. Our parental love was tested by these films, which we were lucky to escape without suffering a seizure. But how the boy loved them! Tears in his eyes when Charizard’s head got caught in that log. Not only did we sit through these god-awful films, we braved the warring hordes on Tuesday nights at Burger King, when new movie tie-in toys were released. No offense, Pikachu, but we’d like to strangle you with our bare hands. Pika! Pika!

Harry Potter and the Sorcerer’s Stone (2001)

Always an advanced reader, Riley devoured the Harry Potter books, and was once interviewed on TV at a midnight release party for a new installment. Indeed, his life had a weird parallel to Harry’s, what with that lightning bolt scar he got when he defeated an evil warlock….wait. That’s not right. No, it’s because Riley began kindergarten the year the first HP book was published, and graduated from high school the same year the final l(and best) film was released. It was like he followed Harry through Hogwarts. He liked to think so, anyway, and to honor his hero, he would re-read every installment just before the next was released, and then stay awake until he finished whichever new adventure had just come out. (More fine parenting.) To say the least, the debut of the first film in the series was a pretty big deal. Not a great movie, but a big deal.

Pirates of the Caribbean: The Curse of the Black Pearl (2003)

The boy was 9. We took him to an afternoon screening. He’s been buckling swash ever since.

Listed out of sequence because he didn’t discover it until years after its release, this film is one that found regular rotation on HBO one summer, and it had a devoted audience of at least two for each screening. George and Riley can quote every line from the film, and will forever refer to character actor Bill Cobbs as “Del Paxton” no matter what beer ad or TV movie he stars in.

The boy loves a good con movie, and that may have started here. Danny Ocean and his smooth criminals charmed and delighted the would-be con man who, luckily, decided to pursue other career avenues. (We were pretty relieved when he gave up that short-lived dream to be a magician and a card shark as well.)

Riley did not stumble upon this Robert Rodrigues gem until it was available on cable, and  then he had to beg to see it because of its R rating. Our rule was that he had to watch any R-rated film alongside his mom, which will seriously squelch a young boy’s interest. But together we watched Johnny Depp chew scenery, lose eyeballs, and look awesome. Families bond in different ways. Besides, it’s too late not to notify children’s services.

Discovered one night in a Florida Keys hotel room, this Brangelina Spy v Spy action flick became a constant companion during that particular vacation. You know a kid likes a movie when he’ll choose it over Shark Week and the Little League World Series.

Proof positive that the boy grew up OK, shortly after leaving home and moving to LA to become an actor himself, he changed his FB background to reflect his newest favorite film, the flawless Paul Thomas Anderson epic There Will Be Blood. Say what you will about our sketchy parenting, this suggests that he turned out A-OK.

We can’t wait to be watching him on the big screen. Riley, we love you and we are so proud of you!  Happy, happy, happy birthday!!!