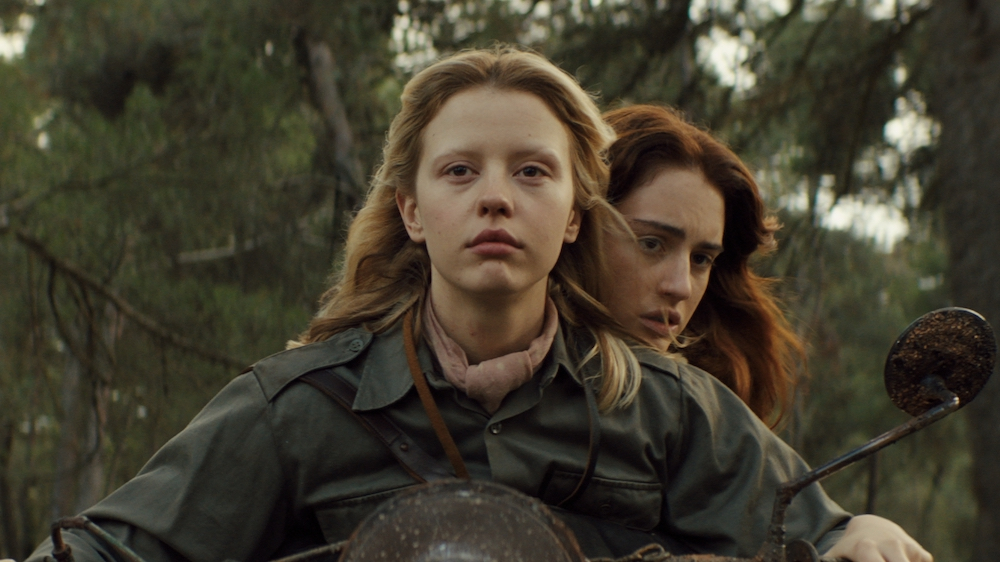 Life’s hard for Ana, who is sleeping in her car and doing her best serving under her abusive boss. Although the time and place aren’t specified and don’t matter, the dark and dated dance hall she caters in suggests that Ana’s gloomy life is somewhere in Eastern Europe. But she won’t stay there for long.

An act of violence shakes Ana (Grace Van Patten) from her stupor and in a dreamy mashup of Alice in Wonderland, Sucker Punch, and a hint of Sylvia Plath, Ana escapes her life by crawling through a glowing oven. On the other side, she discovers a ragtag group of girls – brutal and intoxicating Marsha (Mia Goth), hearty Gert (Soko), and sweet Bea (Havana Rose Liu). The girls play at war, picking off men from any side of an unknown eternal conflict to torture and kill. Instead of a magic tree house, they live inside the hull of an old U-Boat. Like coastal sirens, they hop on the airwaves and cry “Mayday,” leading men into storms and uncertain territory.

Nervous at the thought of killing, Ana warns, “I’ve never been in a war.”

“You’ve been in a war your whole life, you just don’t know it,” replies Marsha.

Writer/Director Karen Cinorre creates a beautiful and increasingly dark dreamscape for Ana to explore her trauma, but the dialogue is heavy-handed while the plot stays meandering and loose. The result is a contemplative romp through female rage, painted like a grim fairytale that isn’t quite sure where it’s going.

Aesthetically, the film is fantastic, and it is anchored by strong performances. Van Patten is enjoyable to watch as Ana comes into her own. Goth is terrifying and power-hungry, a believable cult leader. But Cinorre’s fever dream burns on too long and gets too caught up in its own rules of make-believe, casting off metaphor and leaving it for dead. War is a childlike fantasy playscape for the girls who feel powerless otherwise. But are they all dead? Is this a shared hallucination? Some of the players are characters from Ana’s own life while others are strangers.

One scene implies that Ana has gunned down a whole camp of men, but it shows her doing a choreographed dance with them instead. Is this an illusion inside of an illusion? Mayday doesn’t stand up to questioning, which suits the fantastical film just fine most of the time.

Ana must discover what measure of hope and rage suits her. Marsha is all rage. Bea all hope. And Gert doesn’t want to talk about it. As soon as Ana takes to killing men, she starts seeing all the ones who were kind to her before. And though their fairytale island is littered with ill-suited husbands and would-be rapists, Ana still struggles to condemn the whole kingdom of men.

Ultimately, Mayday is a fine telling of how to find our rage and how to tend to our sadness without letting go of the good the world still has to offer.