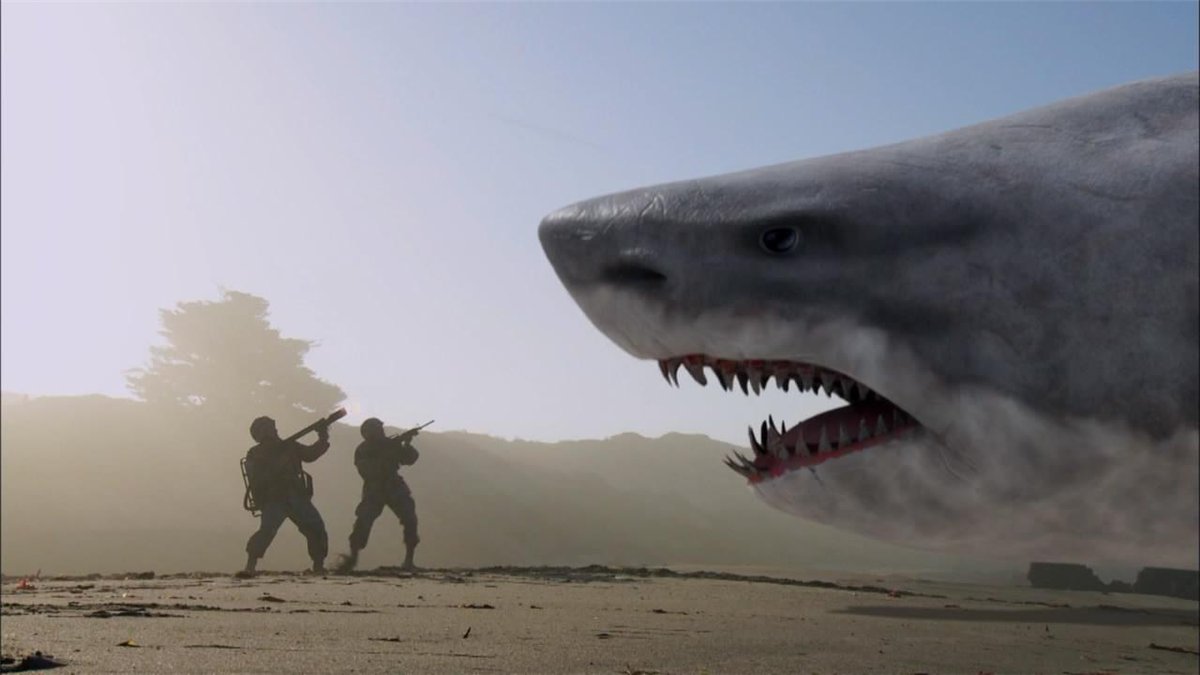 Peanut butter & jelly. Chips and salsa. Sharks and baseball. Some things just go together. Yep, it’s the second week of August,and that means two things: the Little League World Series and Shark Week. It’s our favorite time of Cable TV year, and we’re celebrating with some equally Cable-ready flicks of a similar flavor.

Eventually, the best of the worst mutant animal films leap not from the big screen, but from SciFi network, and few things leap as well as a Super Shark! John Schneider tarnishes his reputation (yep, it’s that bad) in a film that pits a flying, hopping shark against a tank with legs. It kicks the shark. That’s worth seeing.

Okay, so young Scotty Smalls isn’t exactly a little league phenom, but when he moves to a new neighborhood, the local baseball star takes Scotty under his wing. Soon, he’s learning the game, enjoying plenty of teen adventures, and fearing the huge baseball-eating dog that lives behind their sandlot field. It feels like a summer version of A Christmas Story, but director/co-writer David M. Evans delivers a sweet, entertaining slice of nostalgia, especially for anyone who grew up playing sandlot sports.

This is the one film on the countdown most likely to quench the thirst left by Sharknado. Roger Corman – the producer responsible for most of the films on SciFi, and quite possibly most of the worst films ever made – gave us this epic tale of a killing machine that’s half great white, half giant octopus. It’s enormous, unrealistic, and it brings an insatiable hunger for bad actors.

Filmmakers Anna Boden and Ryan Fleck (Half Nelson) offer an insightful tale about Dominicans chasing their dreams of playing Major League baseball and, in the process, deliver a quietly powerful take on immigration.

Chris Kentis’s 2003 foray into terror is unerringly realistic and, therefore, deeply disturbing. It is easily the only excellent shark film since Jaws. From the true events that inspired it to one unreasonably recognizable married couple, from superbly accurate dialog to actual sharks, Open Water’s greatest strength is its unsettling authenticity. Writer, director, cinematographer and editor, Kentis clarifies his conception for this relentless film, and it is devastating.

Buttermaker, Lupus, Tanner, Englepuke – aah, they’re all priceless. The least politically correct baseball film on this list, perhaps ever made, is a kids’ movie. It needs to go in a time capsule. Dozens of films from The Mighty Ducks to Hardball – plus two sequels and one reboot – have followed and failed because they can’t leave the redemption angle alone. What’s genius about this movie is that the level of redemption is not one spark grander than is absolutely necessary. And it manages to be the ultimate underdog kids’ baseball movie without ever being cute.