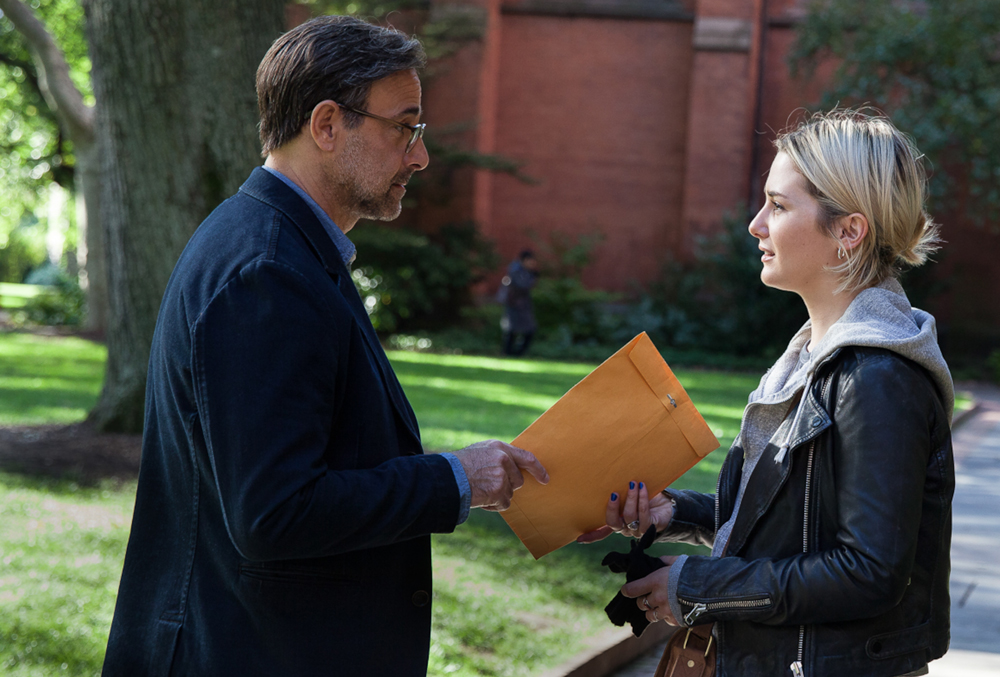 Submission opens with the sardonic narration of an exhausted novelist/professor. His internal monologue sounds a lot like the opening to a novel but his book, we discover, isn’t being written. Ted Swenson (Stanley Tucci) is uncomfortable, unhappy, and uninspired. Then, in waltzes the first conscious student he’s had in years, Angela Argo (an incredible Addison Timlin).

Writer/director Richard Levine adapts Francie Prose’s 2000 novel Blue Angel (based on Josef von Sternberg’s 1930 film The Blue Angel, which is in turn based on Heinrich Mann’s 1905 novel Professor Unrat). Clearly, the story is not a new one. Fortunately, while the plot feels overwhelmingly predictable, the building tension is immense, largely pulled taught by the strong turns of Tucci and Timlin.

The performances, across the board, carry the film. Kyra Sedgewick is so natural on screen it’s breathtaking. She is also the only likable character, as Ted’s content and then suffering wife. Colby Minifie is delightfully nasty in her short scene as the Swensons’ daughter.

Levine does the good work of leaving breadcrumbs without pointing to them with a neon arrow. It’s hard to trust your audience (mother! being a timely example) but like a good novel, this film works because of its layers. And also because Stanley Tucci can do anything.

Surely a teacher/student affair between two narcissistic artists can’t end well, but I’ll leave the how and why to your viewing.

But I guess I’ll just have to read the book.

Submission’s inevitable resolution suggests that no matter the terrible things we do, we’re all just potential fodder for America’s next great novel.