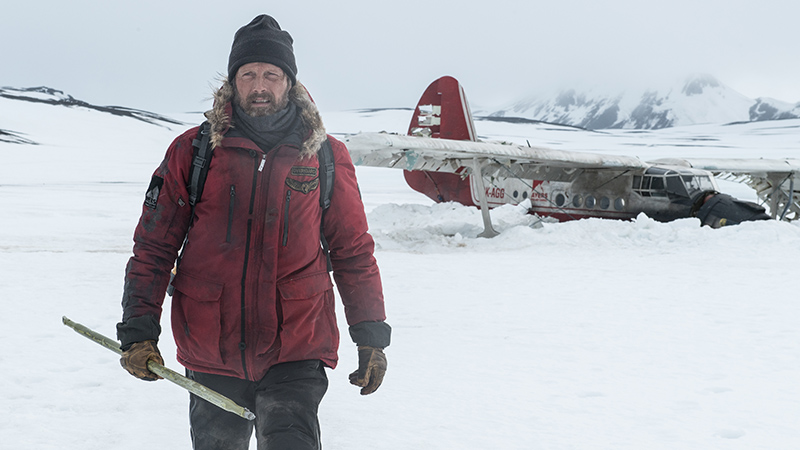 Arctic is a survival film that wastes no time getting to the survival.

Director/co-writer Joe Penna drops us somewhere in the Arctic Circle long enough after a place crash that lone survivor Overgård (Mads Mikkelsen) has had time to construct a makeshift camp. We get no backstory, no thrilling crash effects and no time to assess the situation, which is perfect on two fronts.

1) The situation is pretty damn clear, and 2) so are the film’s unflinching parameters. There’ll be no spoon-feeding here, are you in or are you out?

Mikkelsen is all in, with a supremely committed performance full of both strength and vulnerability. In a film that’s nearly dialog-free, Mikkelsen sparks a curiosity about his character that the film is in no hurry to indulge. Overgård is clearly meticulous and intelligent, cautious and resourceful, but it is after an early rescue attempt goes awry that Mikkelsen delivers the layers of humanity that add an ethereal beauty to the sterile, potentially deadly climate.

Suddenly, there is the safety of a badly injured woman (Maria Thelma Smáradóttir) to consider. As Overgård weighs the options of waiting for another rescue or striking out on foot, Mikkelson excels in making the emotional weight authentic, along with some simple joys that come from supplies found in the woman’s downed helicopter.

While it might be tempting to label this a snow-covered Castaway, the experience is closer to Robert Redford’s 2013 vehicle All is Lost. In his feature debut, Penna displays majestic wide-angle vistas without any photographic glamour that might betray what Overgård is up against. In trimming away all excess narrative, he immerses you only in the often gut-wrenching journey.

The result is never less than believable, a no muss, plenty of frigid fuss endurance tale that feels real.