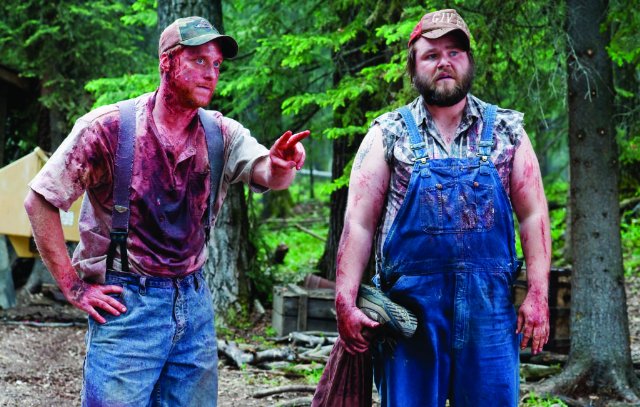 Horror cinema’s most common and terrifying villain may not be the vampire or even the zombie, but the hillbilly. The Hills Have Eyes, Texas Chainsaw Massacre, Deliverance and hundreds of others both play upon and solidify urban dwellers’ paranoia about good country folk. The generous, giddy Tucker and Dale vs. Evil lampoons that dread with good natured humor and a couple of rubes you can root for.

Director Eli Craig’s clever role reversal screenplay, co-written with Morgan Jurgenson, recreates the tension-building scenes that have become horror shorthand for “the hillbillies are coming.”  From the bait and tackle/convenience store encounter with bib overall clad townies, to the campfire retelling of likeminded teens lost forever in the wooded abyss, the set up is perfect.

Each punchline offers the would-be killers’ innocent point of view – expressing their increasingly baffled take on what appears to them to be a suicide pact among the coeds.