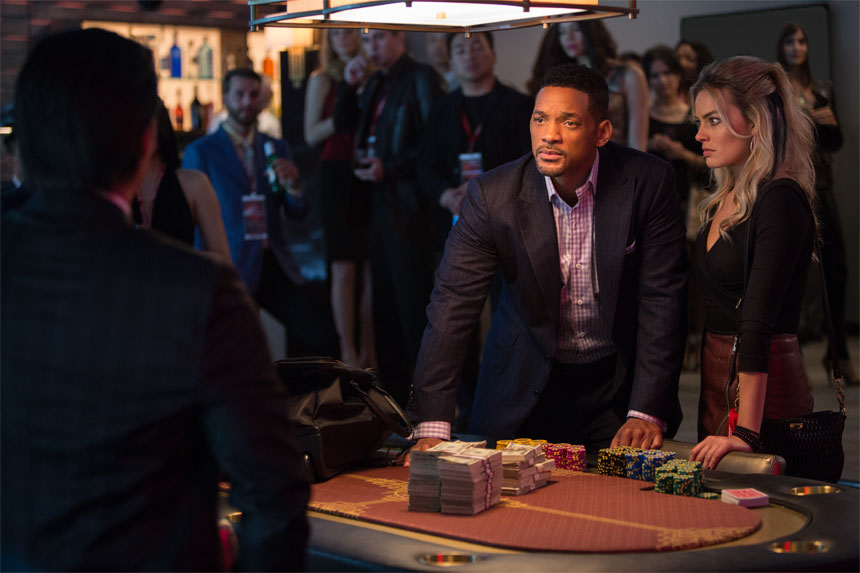 There’s something inherently cool about heist movies, isn’t there? Exotic locales, beautiful people, and outlandish schemes to steal lots of cash often play well together. Focus has all the ingredients to be a solid entry to the genre – as long as you don’t mind a certain irony in the film’s title.

Will Smith is Nicky, a veteran con man operating a well-oiled group of sophisticated thieves. He isn’t looking for any new recruits, until young Jess (Margot Robbie) impresses him with her grifting skills and her eagerness to move into the big leagues. So, she joins the team, but after a big score and some quality alone time, Nicky leaves Jess disappointed and hurt.

Fast forward three years, and Nicky is hired to help a Formula One racing hotshot pull a con, only to discover that hotshot’s longtime girlfriend is his own former flame Jess. With old wounds reopened, Nicky is thrown off his game as we try to keep up with just who is conning whom.

The irony is, a film that points out how people are conned with misdirection can’t keep you from noticing the ridiculous age difference in the romantic leads. Older man/much younger woman casting may be a Hollywood tradition, but that doesn’t mean it’s a good one.

That’s not a knock on the actors. Smith is ultra smooth and remains in great shape, and Robbie’s sexy, spunky mix nearly steals the show, but he’s farther past 40 than she is past 19, and the romantic chemistry between them never feels quite true.

The writing/directing team of Glenn Ficarra and John Requa, already with fine credits including I Love You, Phillip Morris, Crazy, Stupid Love and Bad Santa, exhibit a nice feel for the basics that make a heist film tick. It’s often confident, clever and stylish, especially during an early segment which finds Nicky’s crew wandering through a crowd of Bourbon Street revelers and systemically pilfering at will.

Though the final con is a bit underwhelming and the few nods to character development are rushed enough to be unnecessary, Focus delivers some high-gloss fun. It’s fast-paced and sure to keep you guessing, which is good. You don’t want to look too hard for substance.