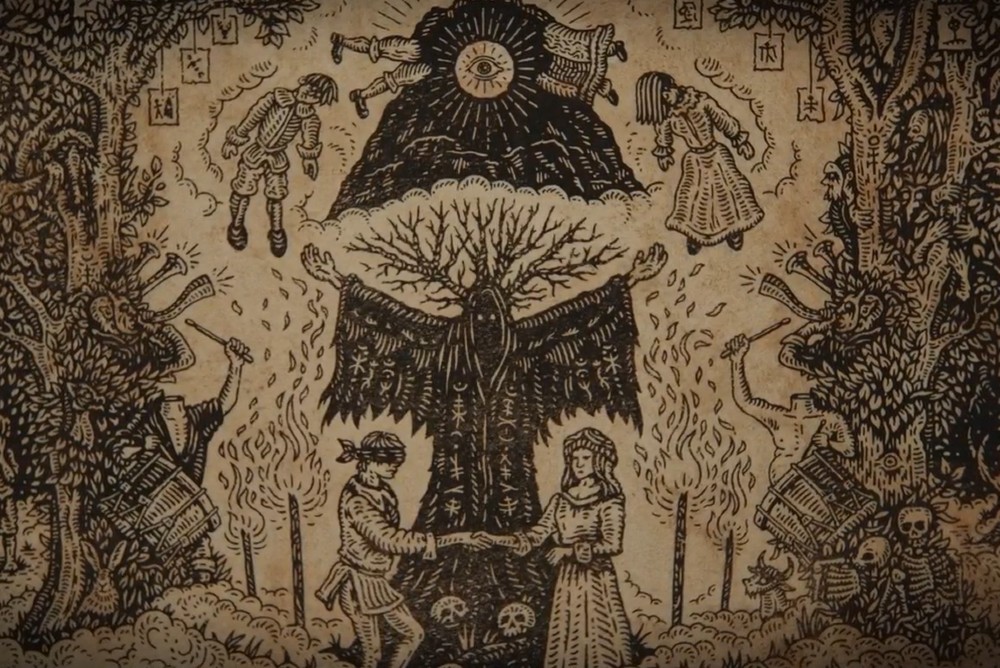 If there’s one Ben Wheatley film people don’t seem to like, it’s 2013’s A Field in England. That film feels a lot like an experiment made with limited resources about strained friendship and hallucinogenic substances.

Wheatley’s latest, In the Earth, is a lockdown film—a kind of experiment made with limited resources about strained friendships and hallucinogenic substances. Wait, wait—it works better this time!

Made during and ostensibly about the pandemic, Wheatley’s film finds more terror in avoiding the virus than other lockdown films have found dealing directly with it. We open, Romero-like, with hazmat suits and government facilities, but that makes way pretty quickly to a dreamlike—one might even say enchanted—trek into the woods.

Scientist Martin (Joel Fry, Yesterday) joins park ranger Alma (Ellora Torchia, Midsommar) in an infection-free zone of forest to make a 2-day trip on foot into the depths of the woods. They are here to check in on a scientist (Hayley Squires, In Fabric) who’s been incommunicado. But we all know that you should never go into the woods no matter the reason.

In its best moments, the film feels a bit like the director shaking off the style-over-substance films he’s made lately. (I’m looking at you, Rebecca.) Instead, he leans toward the genre-bending, lower-budget thrillers like those that got him noticed in the first place: Down Terrace, Sightseers, and especially Kill List.

And, yes, A Field in England.

In the Earth blends ecological terror, pagan ritual horror and Lovecraftian SciFi into a dreamlike episode. Performances are wonderful, and when Wheatley gets gritty, watch out. (Oh, Martin and his poor foot!)

Fry’s energy in the film is so thoroughly honest. Martin is not really outdoorsy, he’s a little butt hurt about something, and he’s probably not that used to human company. And thus, his character is entirely articulated before he even speaks.

Torchia’s grounded, handy performance makes a perfect counterbalance, which prepares us for the two wildcards (played brilliantly by Reece Shearsmith and Squires).

It’s expert casting within top-notch visual storytelling. It’s also a bit exasperating, especially its closing moments. The drug-fueled mayhem and madness work to an extent, but also feel a bit like a narrative cheat.

For longtime Wheatley fans, In the Earth feels like a return to form – or at least a step in that direction. It delivers a couple of good wallops, too.