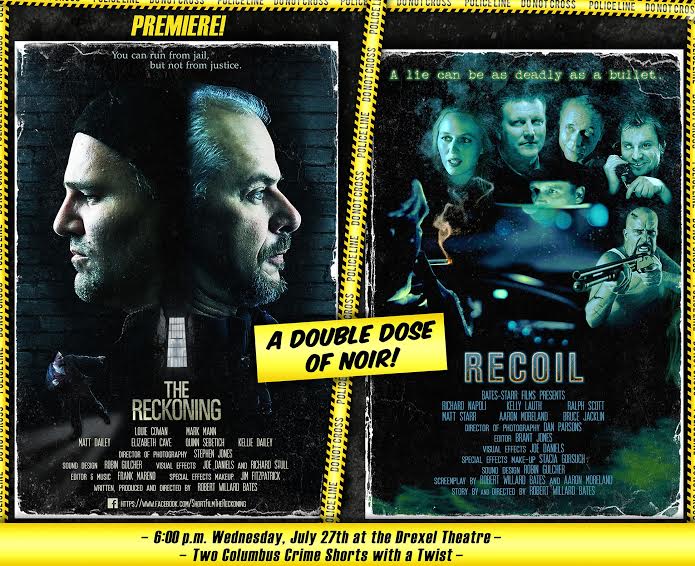 The Reckoning, Bates’s latest, will see its world premiere at the event, while Recoil unveils a new “enhanced” version with an alternate ending.

Both films began as entries in competitions sponsored by the Mid Ohio Filmmakers Association (MOFA). Recoil, part of MOFA’s 72-hour speed filmmaking contest from 2012, was tailored for the contest sub-genre known as “Hard-boiled Detective,” and Bates says the new enhanced version was planned almost immediately.

“Even before the MOFA screening, I knew I wanted to create a deluxe version of Recoil with a better ending. So barely two weeks after we wrapped the competition shoot, I wrote a new ending, and the Recoil team shot a new ending, and the post-production team ‘polished’ the editing and sound design to a higher level, even before the awards had been announced for the competition.”

The Reckoning was meant to be a horror film…then quickly became something else.

“This was for a three-week MOFA competition for horror films in 2014,” Bates explains, “but I found I just couldn’t bring myself to do horror, so I went with my gut feeling and made a Twilight Zone -meets-noir kind of story.”

It is a style of film that seems to come naturally to Bates.

“I’ve only directed six short films so far — I didn’t get started in dramatic narrative filmmaking until 2010 — I’m still looking for my ‘voice’ as a writer-director. I seem to be drawn to stories involving crime, drug addiction, and moral crises. Noir seems to scratch that itch nicely. All I know is I had a blast making Recoil and The Reckoning.”

The films begin at 6pm at the Drexel, 2254 E. Main St., with a Q&A session to follow, featuring Bates along with members of his cast and crew.