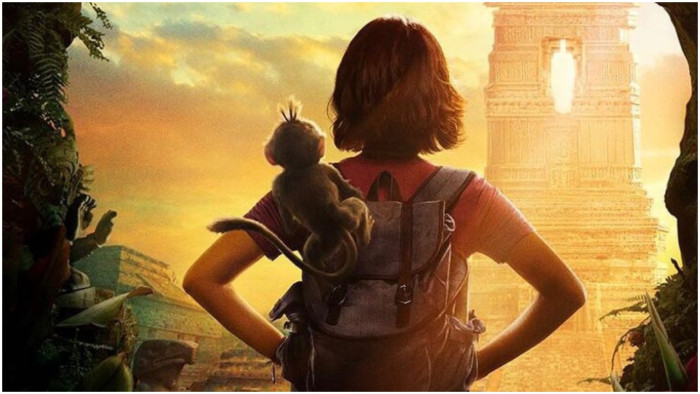 Dora the Explorer takes her backpack, her map and her adventures to the big screen. Can you say surprisingly entertaining?

It helps that director James Bobin (The Muppets, Flight of the Conchords) has mastered the art of cheeky-yet-wholesome fun. Our story begins in the jungle where 6-year-old Dora (Madelyn Miranda) and cousin Diego (Malachi Barton) seek adventure under the somewhat watchful eyes of Dora’s parents (Eva Longoria and Michael Pena).

But Diego is off to the big city with his parents and, about ten years later, Dora goes to stay with him while her parents seek the famed Lost City of Gold.

She may be 16, but Dora (Isabela Moner) hasn’t changed, which means the nightmare of high school is about to get worse for Diego (Jeff Wahlberg – yes, he’s a nephew).

And though the bulk of the plot deals with a kidnapping, a jungle adventure to find Dora’s parents, and an Indiana Jonesesque trek into a lost city, the heart of the film is with outsiders and outcasts facing high school.

Moner is an impressive talent, a point she’s proven with roles in Sicario 2 and Instant Family. She plays bright-eyed Dora with utter earnestness, allowing Bobin and a game cast to land plenty of jokes, none of them cynical or unkind.

This is definitely a family-friendly film, but you don’t have to be a preschooler to find enjoyment. Bobin’s good-natured humor winks at parents, the move to high school will endear the film to ‘tweens, but the high spirit and affection for the source material won’t be lost on little ones.

Is it a classic? It is not. And if you were one of the many middle aged men sitting alone in the theater yesterday, for shame. But Dora and the Lost City of Gold is a charmer and not a bad way to spend some time with the family.

So remember, high school is a horrible nightmare. Be yourself. And no swiping!