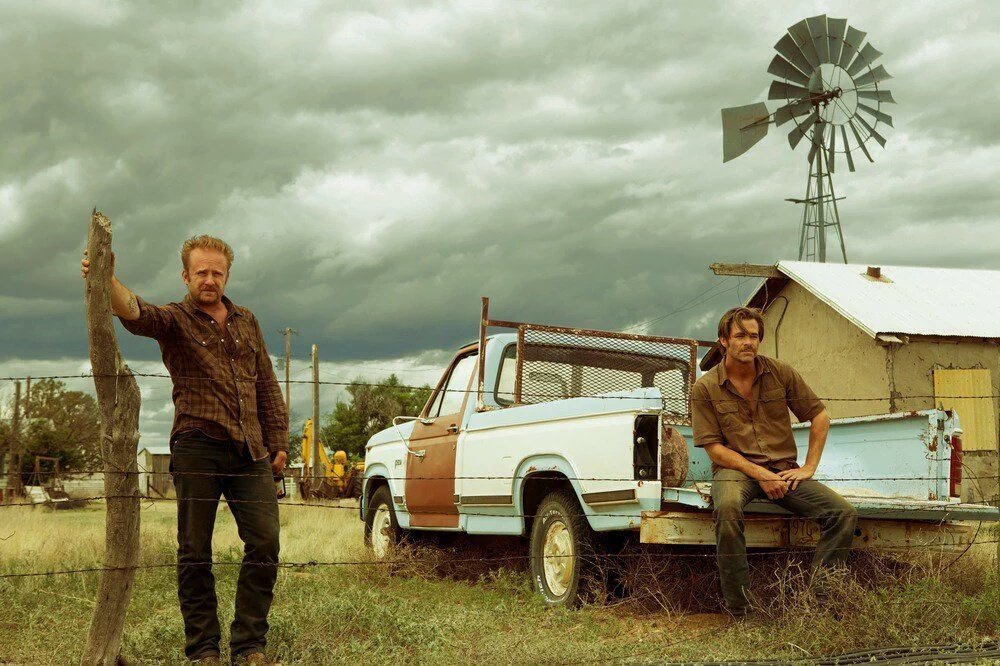 Two brothers in West Texas go on a bank robbing spree. Marshalls with cowboy hats pursue. It’s a familiar idea, certainly, and Hell or High Water uses that familiarity to its advantage. Director David Mackenzie (Starred Up) embraces the considerable talent at his disposal to create a lyrical goodbye to a long gone, romantic notion of manhood.

Two pairs of men participate in this moseying road chase. Brothers Toby and Tanner – Chris Pine and Ben Foster, respectively – are as seemingly different as the officers trying to find them. Those Texas Marshalls, played with the ease that comes from uncommon talent, are Marcus (Jeff Bridges) and Alberto (Gil Birmingham).

Though both pairs feel like opposites at first blush, their relationships are more complicated than you might imagine. Foster, a magnificent character actor regardless of the film, is a playful menace. Though Pine’s Toby spends the majority of the film quietly observing, his bursts of energy highlight the kinship. Their often strained banter furthers the story, but moments of humor – many landing thanks to Foster’s wicked comic sensibility – do more to authenticate the relationship.

Likewise, Bridges – wearing the familiar skin of a grizzled old cowboy – makes every line, every breath, ever racist barb feel comfortably his own. Birmingham impresses as well, quietly articulating a relationship far muddier than the dialog alone suggests.

These four know what to do with Taylor Sheridan’s words.

Sheridan more than impressed with his screenwriting debut, last year’s blistering Sicario. Among other gifts, the writer remembers that every character is a character and his script offers something of merit to every body on the screen – a gift this cast does not disregard.

The supporting actors populating a dusty, dying landscape make their presence felt, whether Dale Dickey’s wizened bank teller, Katy Mixon’s spunky diner waitress, or a hilarious Margaret Bowman as another waitress you do not want to cross.

Even with the film’s unhurried narrative, not a moment of screen time is wasted. You see it in the investment in minor characters and in the utter, desolate gorgeousness of Giles Nuttgen’s photography. Every image Mackenzie shares adds to the air of melancholy and inevitability as our heroes, if that’s what you’d call any of these characters, fight the painful, oppressive, emasculating tide of change.

A film as well written, well acted, well photographed and well directed as Hell or High Water is rare. Do not miss it.