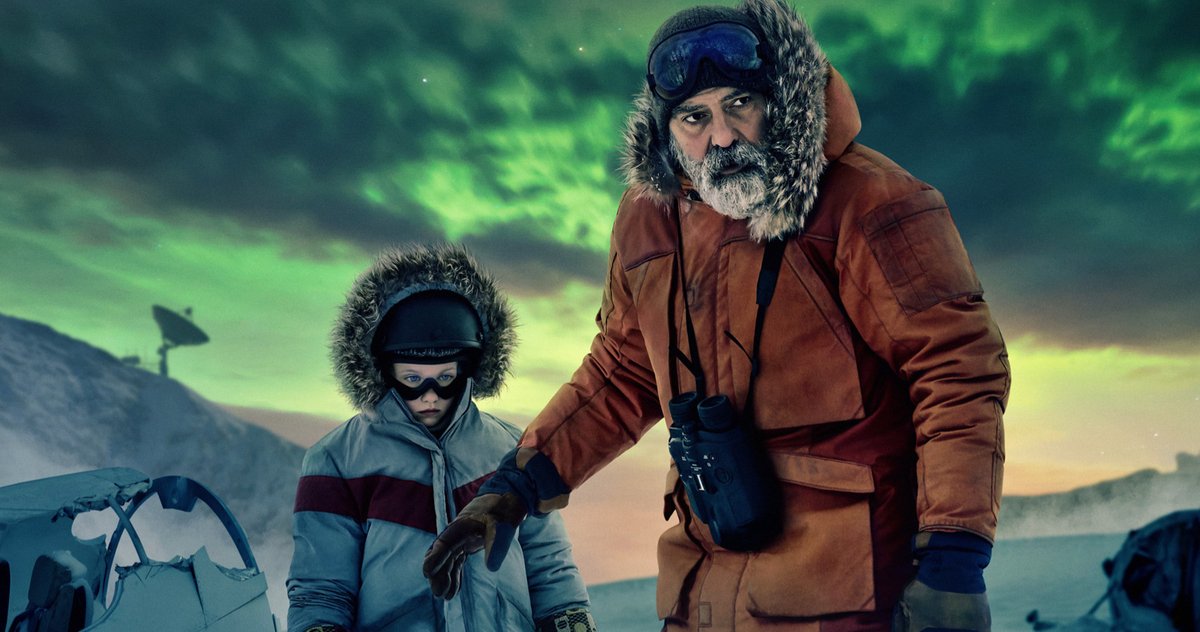 Between sci-fi and horror, it’s sometimes hard to keep track of which genre relies more heavily on recycled ideas. Since I see more horror than anything else, I’m inclined to lean in that direction, but The Midnight Sky adds one to the science fiction tally, building its very respectable tale on some very recognizable building blocks.

Director George Clooney also turns in a gritty and understated performance as Dr. Augustine Lofthouse (nice!), a revered scientist in the year 2049. Three weeks after a cataclysmic event on Earth forces survivors underground, Augustine chooses to remain at his Arctic Circle observatory. His hope is to make contact with Aether K-23, and warn the five crew members finishing a two year mission that there is no home worth returning to.

Augustine’s simple goal gets complicated by his discovery of Iris (Caoilinn Springall), an eight year-old girl missed during the outpost’s evacuation, and by the realization that he’ll have to take her along on a treacherous journey to the only satellite antenna capable of making contact with Aether.

On board with the Aether crew, we learn Sully (Felicity Jones) and Ade (David Oyelowo) are close, Sanchez (Demián Bichir) is the quietly wise vet, Maya (Tiffany Boone) the baby-faced youngster and Mitchell is the stoic manly man we’re not surprised is played by Kyle Chandler.

There are some effectively human moments with the crew, but too much of this thread feels strangely overwritten by Smith, a tendency that only becomes more weighty during the flashbacks to a younger Augustine (Ethan Peck).

Though we learn what drives the Dr.’s frigid quest for redemption, the backstory lessons are more spoon-fed than well-earned, standing in sharp contrast to the gentler hand played between Augustine and Iris.

Remember, Clooney has a deserved Oscar nom for directing, and his latest course is steady as she goes. Many of the deep space segments, buoyed by another wonderful score from Alexandre Desplat, will make you long for a return to big screens, while two tension filled set pieces – one with a snowmobile and another sporting zero gravity blood loss – find Clooney flexing some thrill muscles to fine effect.

There’s nothing really wrong with the themes and devices here, that’s why they’re used so often. The failures of humankind and the promise of the next generation are ideas that sit comfortably in the wonders explored by science fiction. But though our current global crisis gives The Midnight Sky’s iteration some added urgency, it can’t shake the feeling we’ve boldly gone here pretty often.