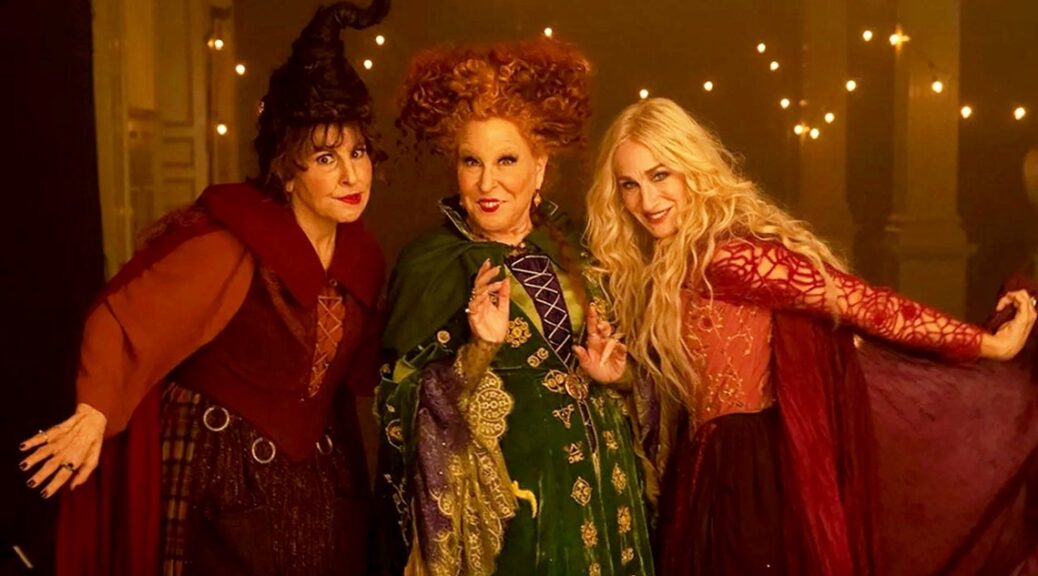 Thirty years ago (more or less), Disney released a family friendly seasonal comedy that underperformed and was forgotten. Forgotten, except by every 8-year-old who watched Hocus Pocus then or would go on to rewatch it annually during spooky season.

The entertainment behemoth finally realized what it had and commissioned a sequel. Hocus Pocus 2 reunites willful witches Winnifred (Bette Midler), Sarah (Sarah Jessica Parker) and Mary (Kathy Najimy) with Salem, the town that hates them.

What is it that reawakens the evil Sanderson sisters? A somewhat convoluted storyline, actually, but it involves female empowerment and community and it’s charmingly, inoffensively told.

Halloween’s here, and with it, Becca’s (Whitney Peak) 16th birthday. She’ll celebrate this year as every year by sharing a little spookiness in the woods with her bestie, Izzy (Belissa Escobedo). It’ll be the first year that the third in their trio, Cassie (Lilia Buckingham), doesn’t join because she’s hanging out with her boyfriend. Meh!

Anyhoo, the Sandersons are accidentally conjured. Somehow the local crystals and essential oils purveyor (Sam Richardson, likable as ever) is mixed up in things. And Cassie’s dad – kindly Mayor Traske (Tony Hale) – is in mortal danger!

Director Anne Fletcher (The Proposal) hits enough nostalgic notes that adult fans of the original will feel seen. Its contemporary story allows for brand new witch-out-of-water scenarios to explore, and, of course, the sisters are always up for a musical number. But this is definitely a kids’ film.

The original was a kind of sibling to Fred Dekker and Shane Black’s 1987 family film Monster Squad. Both showed poorly at the box office and went on to become beloved seasonal fixtures. Hocus Pocus brought the sensibilities into the nineties by, for one thing, recognizing that boys can also be virgins. HP2 modernizes further.

To begin with, not every citizen of Salem is white. And though it’s impossible to entirely redeem three characters looking to eat children, at least the sequel skims the ideas of systemic misogyny. But mainly it offers campy, scrappy, bland but amiable fun.

Midler, Najimy and Parker reinhabit the old trio well enough to remind us why so many kids loved the original. Whether HP2 can strike the same chord with today’s youth is tough to tell, but at least there’s a Halloween flick everyone can watch together.