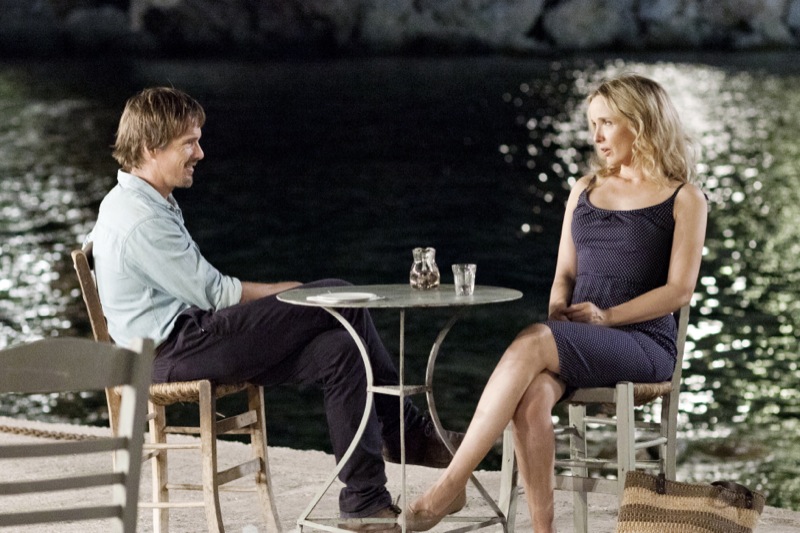 The third installment of what may be the most understated trilogy in cinematic history, Before Midnight catches up with Jesse (Ethan Hawke) and Celine (Julie Delpy) – American writer and French muse – almost twenty years after their first meeting on that train.

Those two romantic kids Richard Linklater followed around Vienna back in 1994’s Before Sunrise, then again through Paris in 2004’s Before Sunset, are now a timeworn couple with kids on vacation in Greece. If nothing else, the pair does visit lovely spots.

For all the similarities in the three films, though, Linklater and his two leads/co-writers take the story in a very natural yet risky direction. The first two installments are among the most unabashedly romantic indie films ever made.

Before Midnight, on the other hand, is far more of a meditation on relationships – the compromises, selfishness, joys, tedium. This is untrod ground in Hollywood, where films find inspiration in either the beginning or the end of a romance. That long slog in the middle, though, that’s hidden from view.

As Celine and Jesse struggle with the consequences of their youthful decisions and wrestle against the weight of middle age, they take some time to examine their lives, flaws and desires. They talk it out.

This is certainly the talkiest film released this weekend, as it relies entirely on conversation to tell its story. There are times when the dialogue feels self-serving. At other times, it gives the film too pretentious an air. On the whole, though, these characters are recognizable in a way that is rarely achieved in film.

Delpy’s performance is particularly courageous, as she’s willing to be unlikeable in the way we all are when we’re feeling particularly bitter and put-upon. Hawke equals her performance, allowing Jesse’s entire demeanor to change in relation to Celine’s mood; after years together, he can predict what’s coming and maneuver to calm the storm. Their unerring take on couplehood is often unsettling, and it brings authenticity to every scene.

Warts and all, Before Midnight is a sort of miracle. It revisits beloved characters with subversive honesty, embraces mid-life without pretending it to be something other than what it is, and finds value in the struggle to remain inspired by your own love.