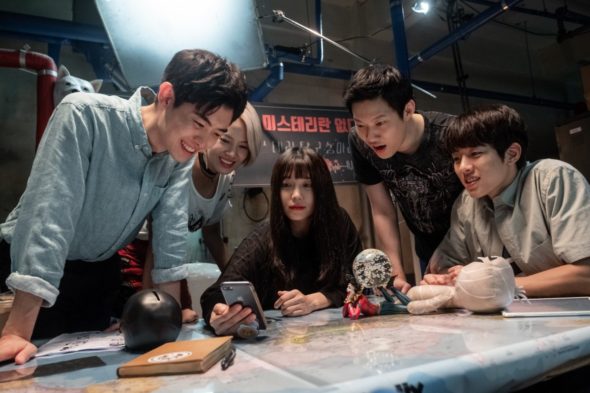 One of the members of Banarama has joined one of the members of Duran Duran in the cast of a new horror movie. That movie is assembled with the ideas and scenes from much better films, but young pop music fans probably haven’t seen any of ’em, so who cares?

Now, put on your mask and join us back in 2020. A similar mindset seems to propel 0.0 Mhz, a Shudder original that brings two stars of the South Korean K-Pop phenomenon to the screen.

Jung Eun-ji, lead singer of the band Apink, also takes the lead here as So-hee, the newbie in a teen team of ghost-chasers known as “Club 0.0 Mhz.” See, that’s the best frequency to call ghosts (don’t argue), and So-hee’s first outing with the group is to a supposedly haunted house in the woods where the kids aim to dial up a little necromancy.

But what Sang-Yeob (Lee Sung-yeol from the band Infinite) and the rest of the gang don’t know is…their new recruit comes from a long line of dead people-seers.

The local at the general store who tells them all not to go to there is just the first in a string of heavily borrowed narrative checkpoints. Pulling from The Grudge to Elm Street to The Conjuring to The Exorcist, first time director Sun-Dong Yoo adapts Jang Jak’s popular webcomic with barely a whisper of originality or visual flair.

But 0.0 Mhz is clearly aimed a notch below anyone who has seen those films. This is strictly teenage fare, content to provide good-looking idols to swoon over and warmed-over scares for kids who want to scream but not have nightmares.

It accomplishes that, and not much else.

So when get-togethers are all good again, 0.0 Mhz will be more than ready to slumber party!

← I Can’t Go Out—Week of April 20
Fright Club: Masks in Horror →
Scroll Up