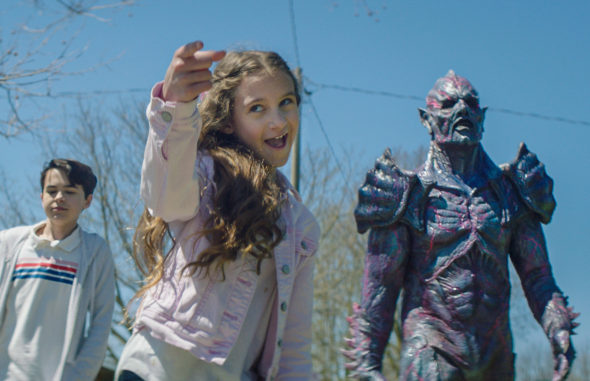 How much fun is this movie?!

Mimi (a wrong-headed and glorious Nita-Josee Hanna) and her loyal (OK, cowering) brother Luke (Owen Myre) inadvertently summon—nay, control—an intergalactic evil so dastardly it can bring out the end of worlds.

But they totally control him, so they make him learn their favorite games, wear cowboy hats and do assorted hilarious and embarrassing things.

Kostanski’s films—The Void aside—fall on the intersection of silly and gory, most of them with a bold VHS aftertaste. I mean all those things in a good way. The tone here is more live-action children’s programming (gone way, way wrong)–perhaps a tad Turbo Kid in its execution.

There is so much joy here, not only in the lunacy of the story or of the creature design (PG’s nemeses from Planet Gigax make an appearance, natch, and they are a riot to look upon).

Will Mimi’s unphased cruelty and selfishness be curbed by friendship? Or will it save the day? Neither? Oh, ok, well then at least it makes for one fiercely funny central character.

Hanna’s command of this unruly heroine may be what sets the film above others in Canadian production company Astron 6’s arsenal. She’s not alone. Astron regular Adam Brooks steals scenes as the kids’ layabout dad, with Alexis Kara Hancey showing off deadpan delivery as his put-upon spouse.

The ensemble works wonders together, each hitting the comedic beats in Kostanski’s script hard enough that the goretastic conclusion feels downright cheery.

This movie could not be more fun.

Subscribe in a reader
← A Searing Indictment of Hollywood or an Anthropomorphic Cat’s Fantasy? You Be the Judge.
New World Disorder →
Scroll Up