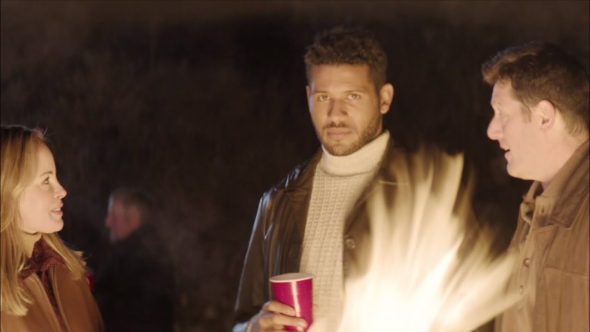 How many films, horror or otherwise, open as a moving van leaves a fresh faced family unpacking in their new dream home? Kurtis David Harder and his new Shudder thriller Spiral welcome you to the neighborhood.

What feels like your typical suburban paranoia film, this time given a fresh coat of paint with the introduction of a same-sex couple at its center, turns out to be something else entirely.

Even as Malik (Jeffrey Bowyer-Chapman) and Aaron (Ari Cohen) try to convince Aaron’s teenaged daughter Kayla (Jennifer Laporte) that she really won’t miss the big city, Malik is seeing some things around the cul-de-sac that worry him.

But Aaron isn’t ready to believe the neighbors are homophobes (or racists, for that matter, even if Tiffany across the street assumed Malik was the gardener).

Spiral quickly falls into a very familiar pattern. Malik, who works at home as a writer, begins to let his research get the better of him. Writer’s block has him paranoid—or maybe there’s a trauma in his past that’s to blame? Is he really seeing something strange in his neighbors’ windows? Is Aaron right, did he go overboard with that new home security system?

It sounds familiar—so much so that the film sometimes just figures your brain will fill in blanks left open.  And while Spiral’s internal logic is never air tight, screenwriters Colin Minihan (It Stains the Sands Red, What Keeps You Alive) and John Poliquin are more interested in bigger patterns. Their social allegory doesn’t achieve the breathless thrills of Get Out, but Spiral swims similar waters.

The filmmakers see patterns in political hatred and the continuing reaffirmation of the status quo, and those patterns are horrifying. While horror has always been an opportunity for the collective unconscious to deal with social anxiety in a safely distant way, Spiral is less interested in creating that comforting fictional buffer. It’s as if the filmmakers want you to see the holes in their plot so you’re more able to see the nonfiction it’s based on.