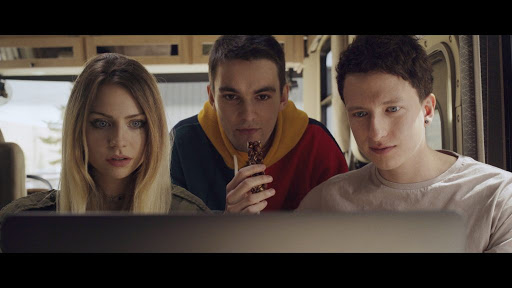 It’s hard to sympathize with a catfish – someone who pretends to be someone else online to develop a misleading relationship.

Yet, in the film, Summerland, directed by Lankyboy (the nickname for directing duo Kurtis David Harder and Noah Kentis), we’re asked to do just that.

Bray (Chris Ball), who is pretending to be Victoria online, has made a connection with Shawn (Dylan Playfair) via a Christian dating site. Bray/Victoria has plans to meet Shawn at the music festival, Summerland.

Along for the road trip to Summerland is Oliver, Bray’s best friend, and Oliver’s girlfriend, Stacey. The problem? Bray has been using Stacey’s pictures to construct Victoria online. Once the trio gets to Summerland, will Bray be able to find Shawn before he finds Stacey?

Miraculously, as the film progresses, we do begin to sympathize with Bray. As a gay teenager, he is not accepted by his parents and struggles with his identity. He wants to meet someone, to have a relationship, and be himself. Despite the fact he has lied about his identity, he’s managed to be as open with Shawn as he has with anyone.

However, the film doesn’t let Bray off the hook entirely. We’re repeatedly reminded that he’s constructed a relationship around a lie. We must ask ourselves if some lies are forgivable when the liar struggles with what it means to be himself.

Most of the film is centered around the road trip to Summerland. Bray is anxious to get there so he can finally meet Shawn in person. Oliver wants to enjoy the journey. Stacey is rebelling against a stepdad she doesn’t like.

Lankyboy wants their movie to be quirky, but it’s a conventional road trip/relationship movie with some weird extras thrown in. Those weird moments are forced, don’t contribute much, and end up making a short movie feel intolerably long.

There are also far too many montages for such a short film.

The actors aren’t terrible in their roles. They’re not the worst trio to spend time with on a road trip movie, and the film does have one or two funny moments. But too much of the movie is focused on what it wants to be rather than effectively embracing what it is.

Unfortunately, what is ends up being is an unmemorable experience.