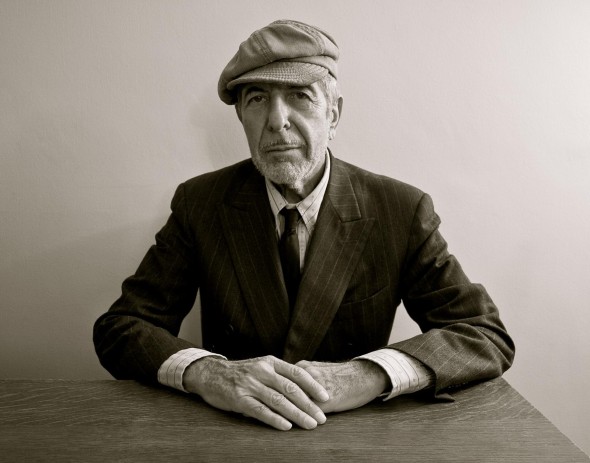 Do you remember the 21st night of September? Earth, Wind and Fire obviously can. So can we – George turned 50! And he wasn’t the only one blowing out candles (though he was definitely the cutest one). Bill Murray turned 64, Stephen King turned 67, and the great Leonard Cohen turned 80.

To celebrate these milestones, we decided to listen to some Cohen, who can fill any number of soundtracks. From Natural Born Killers to Shrek and dozens more, you’ve undoubtedly heard more Cohen in the movie theater than you ever have on the radio. Given the melancholy beauty of his work, it’s hardly surprising that filmmakers routinely turn to Cohen’s distinctive sound to provide ambiance, atmosphere, and often even an aid to characterization.

Robert Altman’s foray into Westerns produced the beautifully off-kilter McCabe and Mrs. Miller, a tale of love, progress, naiveté, opium, and snow. In creating the most human Western until Eastwood’s Unforgiven, Altman used haunting songs by Cohen to mirror the film’s melancholic poetry. Cohen gave the director permission for several songs from his first album, Songs of Leonard Cohen, because he’d been a fan of Altman’s earlier film, Brewster McCloud, but the songwriter didn’t at first care for McCabe and Mrs. Miller. Cohen’s first reaction notwithstanding, the music, Vilmos Zsigmond’s glorious photography, and the stellar performances from what would become the Altman stock company of actors came together to create an entirely unexpected genre film.

Quote: If your life is a leaf that the seasons tear off and condemn/They will bind you with love that is graceful and green as a stem

Steven Shainberg’s charmingly subversive, sadomasochistic romance picture boasts, above all, a single, perfect performance from Maggie Gyllenhaal. Every other remarkable element – darkly clever script, strong casting, crisp visuals, and excellent soundtrack including the Cohen track “I’m Your Man” – takes a backseat to the role that made audiences wake up to the presence of this winsome-yet-naughty actress. The film – which manages to be diabolically humorous, emphatically politically incorrect, and yet entirely appealing – benefits in one quick scene from Cohen’s ability to capture all the same energies in lyrical form.

Quote: If you want a lover, I’ll do anything you ask me to/And if you want another kind of love I’ll wear a mask for you

I’m not a huge fan of any entry in the Shrek franchise, but the first film gets big props for taking one of animation’s more bizarrely profound turns when mirroring the big ogre’s existential turmoil with the world’s most perfect piece of pop poetry, Cohen’s “Hallelujah”. The film used John Cale’s mournful version (which is also features on the Basquiat soundtrack), while the soundtrack made Rufus Wainwright’s take popular. Whichever the version, including the song gives Shrek the appearance of depth and edginess unexplored in any Disney film.

Quote: And even though it all went wrong/I’ll stand before the Lord of Song/With nothing on my tongue but Hallelujah

Natural Born Killers is a kind of psychedelic reimagining of Terrence Malick’s Badlands. The film boasts just glimpses of the brutal, clever, verbal script only Quentin Tarantino can produce, primarily because his screenplay was rewritten and, unfortunately, directed by master of cinematic hyperbole, Oliver Stone. Though the product is an over-the-top, trippy but captivating mess lacking the raw energy of anything Tarantino would go on to direct, it’s not entirely without appeal. Mashing together amped-up ideas from Bonnie and Clyde to Morton Downey, Jr. to some of the most magnificently brutal films in Hollywood’s closet, this picture certainly nails its tone. Just a little assistance in this venture comes from Cohen’s pessimistic premonition “The Future”.

Quote: When they said repent, repent/I wonder what they meant

Given the volume of Cohen’s work sprinkled across films, it seems fitting to fill the screen and the theater with an entire picture dedicated to his work, as Lian Lunson has done with her documentary. Leonard Cohen emerges from his tower of song to share thoughts about poetry and stories about those elements that informed and propelled him. All the while some his most talented and devoted followers – whether it’s Rufus Wainwright’s playful cynicism with “Everybody Knows” or Antony Hegarty’s earnest energy with “If It Be Your Will” – treat us to his songs like prayers to something other than God.

Quote: But you’ll be hearing from me baby, long after I’m gone/I’ll be speaking to you sweetly from a window in the tower of song