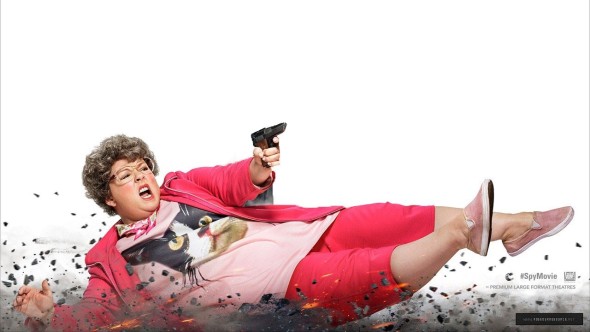 Believe it or not, 2015 is officially half over. It’s been a pretty big half, though – July through December has its work cut out for it if it hopes to stand up. While historical Supreme Court rulings and heartbreaking tragedies are the items we will remember the longest, there were also some great movies released in the first half of this year that deserve a mention. Here are the best films of the first half of the year.

10. Spy
Spy is the latest team-up for director Paul Feig and star Melissa McCarthy, who gave us the hilarity of Bridesmaids and its one-for-the-ages character of Megan. (They will collaborate again in what may be the most inspired reboot of them all, Ghostbusters.) Feig also gets writing credit for Spy, and it’s hard to believe he didn’t craft the script especially for McCarthy. Beyond creating a boisterous, hilarious, perfectly cast send up of Bond-style capers, the film also meticulously points out the steaming pile of double standard b.s. McCarthy has had to deal with during her entire career.

Rose Byrne continues to show real comic flair, and Jason Statham practically kidnaps the film as Agent Rick Ford, a riotous parody of the to-the-extreme tough guy roles that made him famous. But this is McCarthy’s show, and a leading role tailor made for her powerhouse talent. As her Agent Susan Cooper assumes various identities and becomes more confident in her role as a badass, the film lands some sly shots at the sexist barbs often thrown McCarthy’s way. Bravo.

9. La Sapienza
If you like to check your phone or take frequent bathroom breaks at the theater, La Sapienza is not for you. Writer/director Eugene Green makes sure every shot and each line of dialogue is significant in his beautiful meditation on spirituality and love.

A renowned French architect and his wife take a trip to Italy, where they befriend a set of siblings. Many philosophical discussions follow, with Green often making sure each character speaks directly into the camera, demanding that viewers take part.

As Green’s camera lingers on the contours of classic Italian structures, and as man and boy share their architectural philosophies, the roles of teacher and student begin to blur. While one questions the meaning of life and believes in “salvation through work,” the other’s desire is to create spaces with an “emptiness which must be filled with people and light.”

La Sapienza still thinks big questions can have simple answers, and that cinema is still capable of uncovering both truth and beauty.

8. Clouds of Sils Maria
Somewhere between Twilight and the tabloids, Kristen Stewart began doing some real acting. She’s better than ever in Clouds of Sils Maria, and though hers is a supporting role alongside one of the screen’s major talents, Stewart pulls plenty of weight in a terrific drama with much to say.

Juliette Binoche is customarily excellent as Maria, a famous actress returning to the stage in a revival of the play that launched her career twenty years earlier. Stewart is Maria’s ever-present personal assistant Valentine, who not only runs both errands and lines for Maria, but serves as her bridge to a younger generation.

Writer/director Olivier Assayas’s script is sharp and his camera is fluid, effectively blurring the line between onstage and off. The beauty of Clouds of Sils Maria lies in its complexity. It offers subtle insights that sneak up on you, and uses an exceptional cast to make them stick.

7. The Nightmare
Idiosyncratic documentarian Rodney Ascher walks a line in his films between open and earnest investigation and metacommentary. His great achievement with this film is not that it transcends the quirky indie doc subgenre, but that it works equally well as an honest piece of nonfiction filmmaking and as a terrifying horror film.

He investigates sleep paralysis, but his weirdly attuned style and his mastery of slow reveal pulls you in to the deeply disturbing case histories long before you really understand what is happening to these poor people. Then, little by little, he makes you realize that, by virtue of watching this film, you may also be at risk. It’s a bit like The Ring, but a real life version.

Any horror film worth its mettle will make you a little nervous about going to sleep. This one will panic you.

6. Girlhood
Moments after Girlhood’s perfectly disconcerting opening, you settle into the world of its protagonist, Marieme, but writer/director Celine Sciamma has already told you something very important. You shouldn’t assume anything.

Sciamma, thanks to a quietly powerful performance from Toure, represents more than just the bittersweet romance and nostalgia generally associated with the coming of age film. Saying goodbye to childhood is rarely as simple and lovely as movies make it out to be, and Sciamma’s interest is in seeing the same transition from an under represented point of view. For Marieme, her choices are limited along racial, sexual and socioeconomic lines, but Sciamma’s perceptive film is too honest and understated to feel preachy.

5. Love and Mercy
Even if you’ve never heard a note of Brian Wilson’s music, one listen to “God Only Knows,” or countless other Beach Boys classics reveals a musical visionary like none other. His success and inner turmoil have both become legend, and director Bill Pohlad utilizes an ambitious script and fine performances to make Wilson’s story resonate with heartbreak and hope.

4. It Follows
A perfect blend of new ideas and genre respect, It Follows looks like a John Carpenter film but tells a unique tale. More than the STD of horror movies, it’s a film that channels the best of the genre while using an indie drama sensibility to keep you off guard. Excellent performances and positively inspired camerawork ensure that you care what happens, and are basically terrified from the opening sequence.

Writer/director David Robert Mitchell employs an effectively retro score with a voyeuristic camera to keep you on edge, and the impossible to pinpoint time period allows the film to feel both fresh and nostalgic simultaneously. He punctuates the building dread with a handful of jump scares – usually really effective ones – but the film is not reliant upon this gimmick. It’s a unique vision, beautifully written and provocatively executed, that marks a serious new force in filmmaking, genre or otherwise.

3. Inside Out
It’s a tumultuous time in young Riley’s life. Her family has just moved from Minnesota to San Francisco, and her emotions are working overtime. Inside her mind, five particular feelings are running the show at Riley “headquarters.” There’s Joy (Amy Poehler), Sadness (Phyllis Smith), Fear (Bill Hader), Anger (Lewis Black) and Disgust (Mindy Kaling). Joy is usually able to keep the rest in check (“I’m detecting high levels of sass!”), but when she and Sadness get lost in the outer regions of Riley’s psyche, the race is on to get back to base before the young girl’s personality is forever changed.

So, yes, Pixar returns to the “secret world” theme they know well, but there’s no denying this is a brilliant premise, perfectly executed by a veteran Pixar team. From rides on the “train of thought” to commercial jingles that get stuck in your head to a clever gag about mixing facts and opinions, co- directors/co-writers Pete Docter and Ronaldo Del Carmen keep things fresh and funny while maintaining a simple conflict that easily gets younger viewers invested.

And that’s the real beauty of Inside Out. Once again, Pixar examines the changing phases of life with charm, humor and a subtle intelligence that can’t help but give you a fresh appreciation for all the jumbled feelings that make life worth living.

2. Mad Max: Fury Road
After 30 years, George Miller returns to the desolate wasteland that drove poor Max Rockatansky mad. What he delivers with Mad Max: Fury Road is a film so far superior to its three predecessors as to be almost magical. The always magnificent Tom Hardy more than fills the shoes left behind by Mel Gibson, but the star of this film is Charlize Theron as Furiosa – just another cast off looking for redemption. If you can not only outshine but out-badass Tom Hardy, you are one miraculous performer.

Like Miller’s previous Mad Max efforts, this film dusts up some political and environmental gripes, but he’s never been so pointed about his concerns. Not that this will distract you from the utterly kick ass visuals of a film shot using mostly practical effects. How on earth he did some of this is anyone’s guess, but it looks like hell on wheels and leaves you cheering. A flamethrower electric guitar? Hell yeah!

1. Ex Machina
Smart, seductive, and wickedly funny, Ex Machina is the directorial debut from veteran writer Alex Garland, and it instantly marks him as one of the most promising dual threats in film.

Computer wiz Caleb (Domhnall Gleason) gets word that he’s “won” a contest at work. The firm’s founder, Nathan (Oscar Isaac), has picked Caleb as the lucky one who will get a look inside the reclusive genius’s world and assist on a top secret project.

The ever-versatile Isaac is mesmerizing, crafting Nathan as a walking, talking, drinking God complex in bare feet. Gleason gives Caleb a perfect mix of naïveté and good intentions, while Alicia Vikander is a true wonder as Ava. Living in the space between woman and machine, Vikander pulls it off with nary a hint of caricature.

Sci Fi and horror films have long provided glimpses into a particular generation through the fears and anxieties that manifest on screen. Anchored in science, sex, and creation (sound familiar?), Ex Machina is an insightful, deliciously fun time capsule we need to open right now.