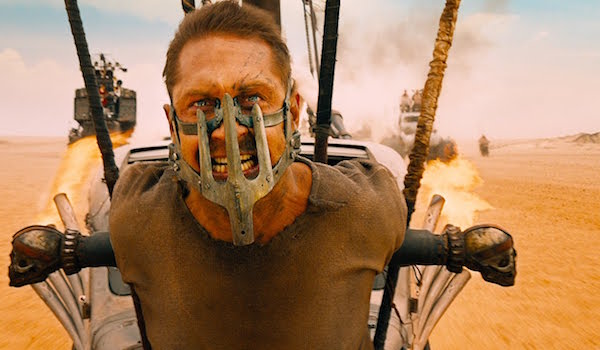 What a day. What a (mostly) lovely day!

Yes, Mad Max: Fury Road came up big in this year’s Oscar nominations. In fact, it’s a big Tom Hardy year, as the actor’s two films – Mad Max and The Revenant – cleaned up.

The year’s two most crowded fields are not necessarily the most glamorous, but determining the top picks from the possible contenders in best supporting actor and best cinematographer had to be tough. So we’ll will try not to complain too terribly loudly.

For cinematography, spot on! Carol, Mad Max: Fury Road, Sicario, The Revenant, The Hateful Eight. There are no bones to pick here.

For best supporting actor, though, let’s run through a handful of the blistering and brilliant performances that did not make this cut: Benicio Del Toro (Sicario), Josh Brolin (Sicario), Paul Dano (Love & Mercy), and most grievously, Oscar Isaac (Ex Machina). In their stead are four worthy adversaries and one unfortunate “good job, old man” nod.

Yes, Stallone (Creed)– in what is rightly considered his best performance in eons – takes the place of far stronger performances based on public good will. And while everyone high fives over the good fortune of the 69-year-old, we mourn for the far, far, far superior performances that will go unacknowledged.

Otherwise, though, not a lot to bitch about.

Best director nominations were entirely welcome, with Adam McKay getting noticed for his unexpected and wonderful work on The Big Short, George Miller capping off an exceptional day for Mad Max: Fury Road, Alejandro G. Inarritu getting a chance at back-to-back wins for The Revenant, along with two highly worthy newcomers to the category, Tom McCarthy for Spotlight and Lenny Abrahamson for his marvel, Room.

Original screenplay nominees are strong: Bridge of Spies, Inside Out, Spotlight, Ex Machina, and as a nice surprise, Straight Outta Compton. We wouldn’t have minded a nod for The Hateful Eight, but those five are a fine group. Adapted screenplay hopefuls are The Big Short, Brooklyn, Carol, Room, and The Martian taking the final slot we’d have given to Steve Jobs.

Our biggest gripe comes at the top, with the exquisite Carol being denied a best picture nod while the obvious pandering of The Martian is rewarded. Criminal. Otherwise, Best Picture is a healthy group: The Big Short, Bridge of Spies, Brooklyn, Mad Max: Fury Road, The Revenant, Room, and Spotlight.