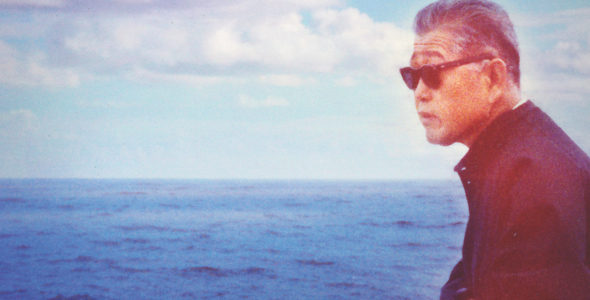 There is a silent poetry contained in Kimi Takesue’s fly-on-the-wall documentary focusing on the daily life of her aging grandfather, Tom. 95 and 6 to Go is the calm portrait of this widowed Japanese immigrant who carries on through his calisthenics, coupon clipping and channel surfing.

The film portrays these apparently mundane activities with a zen-like attitude through Takesue’s simple and elegant camera work. There is a hushed beauty in the director’s approach, which allows us as the audience to soak in and associate with Grandpa Tom’s life in his house.

There is one rather eye-catching shot of Tom flipping through TV channels. In the foreground of the shot, we see Grandpa’s tanned, leathery hands clutching the blockish television remote. It almost looks archaic compared to the sleek designs we are so used to with today’s 55-inch flat-screens. Grandpa presses down every half-second, unimpressed with whatever program he comes across. There is a layer of grain in this shot (and several others), a choice that adds a faded element to correspond with the nostalgic texture of the project.

Takesue explores a central theme of reinvention, as when she asks Grandpa Tom to revise a film script she has written. The more he discusses his own ideas on how the script should evolve, the more his eyes flicker with youthful vigor.

Tom is also reinventing himself as he copes with life as a widower. He does not seem like the man to wallow in despair following the death of Kimi’s grandmother, but rather he seeks action in those ostensibly ordinary tasks we notice early on. It all seems like a practical process to Tom, readying himself for whatever may happen in the following chapter of his life.

95 and 6 to Go is a reserved documentary focused on the small aspects of day-to-day living. The film captures something essential and human through its quiet observation of Grandpa Tom and his placid routine toward reinvention.