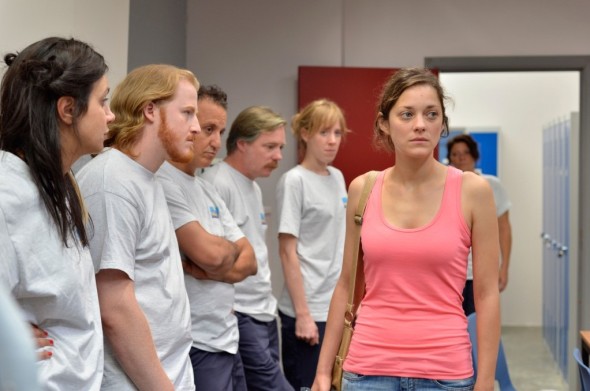 A woman wakes from a nap due to a phone call. She’s baking for the kids. It seems like a lovely way to spend your afternoon, really, drowsy and surrounded by the smell of baked goods. So why does Sandra (Oscar-nominated Marion Cotillard) sound defensive about the nap and too enthusiastic about the treats with whoever is on the phone?

Because there are layers and layers to the most ordinary of circumstances, a point Two Days, One Night explores so effectively.

Sandra’s co-workers were faced with a vote: each stands to gain a large bonus in return for eliminating one salary – Sandra’s. She has the weekend to convince them to give up their bonus and save her job.

If it sounds contrived, rest assured that writing/directing brothers Jean-Pierre and Luc Dardenne embrace their characteristically naturalistic style to great effect. The films lacks any hint of melodrama, thanks in part to the brothers’ honest style and in greater part to a lead performance utterly absent of artificiality.

Cotillard is a master, and this film is no exception, it’s a highlight. Her gestures, her gaze, her posture, every syllable of dialogue simply convince you this is a woman fighting for her dignity as well as her job. She’s aided by a large, capable cast and buoyed by the Dardennes’ fly-on-the-wall camera work.

The film has larger goals, looking at ideas as concrete as corporate indifference, as amorphous as depression, and as grand as human nature. Grounding all this examination in the intimate and mundane details of one woman’s struggle keeps the film anchored in the reality so precious to the filmmakers.

Two Days, One Night is not as touching as the Dardennes’ Kid with a Bike or as gripping as L’Enfant – two of their finest efforts. It feels more contrived than those films, its craftsmanship more obvious. But Sandra’s challenge and her personal journey are so beautifully articulated that you won’t care. The film is a small, potent wonder.