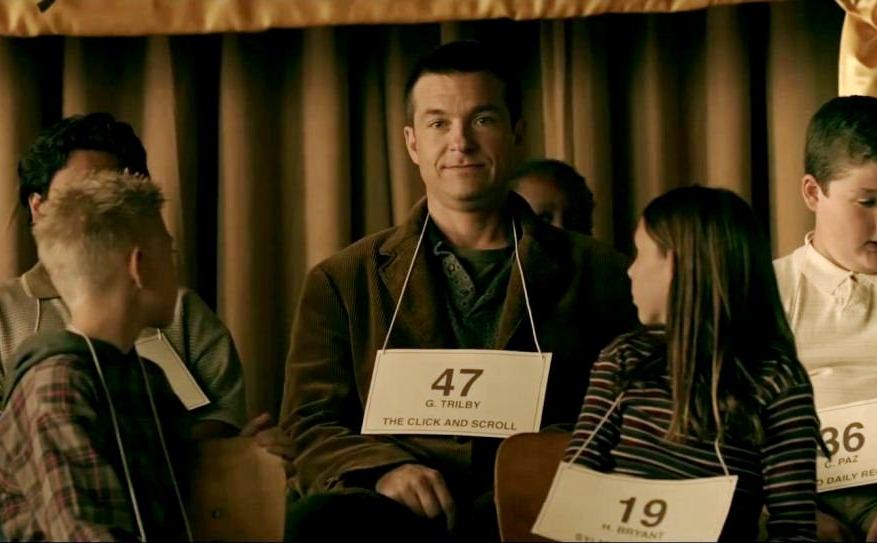 Is it amusing to watch a 40 year old man act like a total S.O.B. to everyone around him, frequently unleashing crude verbal assaults on kids and parents alike?

When that man is Jason Bateman..yes, yes it is.

Bateman not only stars, but makes his big screen directorial debut in Bad Words, and he delivers a darkly funny romp through the cutthroat world of spelling bees. Think Best in Show meets Bad Santa and you’ll be in the right-but-way-wrong neighborhood.

Smarmy Guy Trilby (Bateman) crashes the spelling regionals in his hometown of Columbus, informing the judges that through a loophole in the rules, he is eligible to compete. With no legal grounds to deny him, they relent and find out Guy is not only a great speller, but a nasty douchebag who will stop at nothing to humiliate his opponents.

Why would a grown man do such a thing?

Reporter Jenny Widgeon (Kathryn Hahn) reflects our curiosity, and she travels with Guy on his journey to the national finals, hoping to discover his motives and land a story.

The screenplay, a debut for Andrew Dodge, has apparently been floating around for years, scaring off potential filmmakers with its down and dirty edges. Bateman, who’s been elevating projects since his days as a child actor, proves a natural at fleshing it out.

As a comic actor, Bateman’s timing is always flawless, a trait which translates well to his direction. He keeps the story lean and mean, with a quick pace and plenty of funny moments that never feel forced. Best of all, the heartwarming life lessons are kept to a minimum.

If you guessed that Guy and reporter Jenny find love, while a cute young speller teaches Guy the meaning of friendship, no one could blame you. Bateman’s not following that tired formula, and bless him for that.

That’s not to say that Jenny and Guy don’t share some hilariously awkward moments, or that precocious spelling champ Chaitanya (young Rohan Chand in a charming performance) doesn’t want to be friends, but Bateman never lets any of it become overly saccharine. He sets his tone and, for the most part, sees it through.

If you don’t like nasty funny, stay far away from Bad Words.

But if you do, come sit next to me.

One thought on “Words With Enemies”