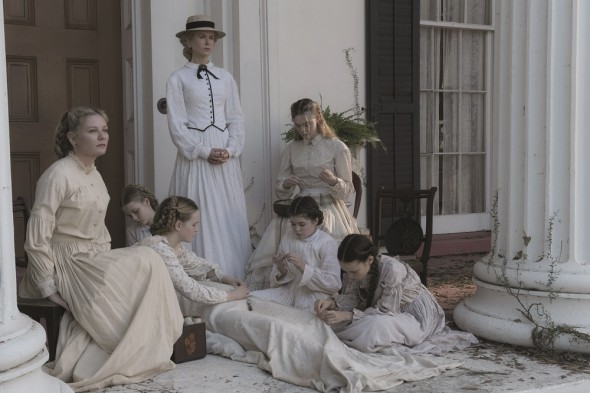 In a mist-laden Virginia woods, pre-adolescent Amy (Oona Laurence) mushroom picks her way to uncovering a wounded Union soldier. Sure he’s a bluebelly, but she can’t leave him there to die, can she?

Amy helps him back to Miss Farnsworth’s Seminary for Young Ladies, the isolated boarding school where she, Miss Farnsworth, one teacher and just a handful of pupils are waiting out the Civil War.

The Beguiled marks a return to critical favor for writer/director Sofia Coppola, who won best directing honor at this year’s Cannes Fest Festival for her adaptation of Thomas Cullinan’s novel.

Few frame delicate, ornate beauty quite like Coppola. She has found quite a palette with this film – the draping trees, columned porches, foggy woods, the tender grace of the school’s inhabitants.

The film is a study in restraint, and probably the most conventional film Coppola’s made. She abandons the sexual hysteria of Don Siegel’s pulpy 1971 adaptation, creating instead a chamber piece lush with decay and longing.

From his first words at the school – “Corporal John McBurney, 66th New York, grateful to be your prisoner,” – Colin Farrell’s wounded deserter is a likeable mystery. Is he earnest or manipulative? A good guy, or a wolf in the hen house?

He’s met his match, though, in Martha Farnsworth – Nicole Kidman. Coppola’s script is crisp, and no one delivers a passive aggressive barb quite as skillfully as Kidman.

Like her girls, Martha carries a lived-in weariness that weakens her to this attractive distraction from the war. But she is a survivor, an instinct she hopes to bring out in her charges as well.

The cast is uniformly wonderful – Kirstin Dunst, in particular. Coppola is fascinated by the internal power struggle as well as the morphing moral and emotional factors at work here. As patriotism battles Christian compulsions in the beginning, so competition for the Corporal’s attention evolves into fear.

The film makes a sharp turn with the inevitable explosion of impotent male dominance. As sudden as it seems, Coppola’s languid approach earlier in the film ensures that each character’s inner motivations and interpretations are clear – without the hackneyed flashback or interior monologue Siegel resorted to.

The result is a bewitching film – beautifully acted, gloriously filmed and haunting.

Subscribe in a reader
← Evil Twin Powers…Activate
Baby Did a Bad, Bad Thing →
Scroll Up