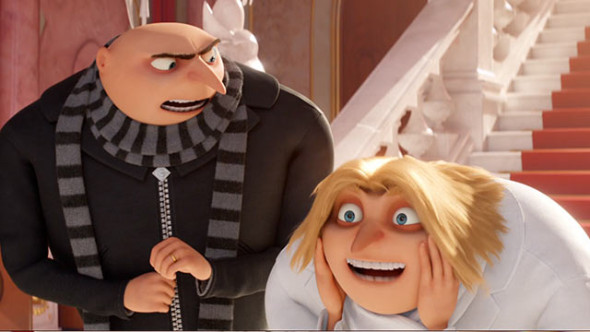 I’ll be honest, it took a little research before I remembered anything at all about Despicable Me 2 that wasn’t a minion.

And even when those little yellow scene-stealers got their own movie, the result was surprisingly mediocre.

The entire franchise has been memorable only for being so easily forgettable. So how’s part 3?

Steve Carell returns as the voice of Gru, the super villain-turned good guy who’s now teamed up with wife Lucy (Kristen Wiig) for double the secret agent heroics. And, their three adopted daughters are back to say “fluffyyyyyyyyy!’ and other adorable things.

The family ties get more tangled when Gru meets his long lost twin brother Dru (also Carell), who convinces him to return to the dark side and steal a massive diamond from an 80s-obsessed baddie named Balthazar Bratt (South Park‘s Trey Parker).

The writing and directing teams are full of animation vets who have been at least some part of every film in this franchise, so it’s little wonder DM3 can’t find ways to revitalize the brand. It doesn’t really want to.

While all the films have been pleasantly amusing, part 3 may actually land the greatest number of solidly funny gags. The “minions in prison” sequence is an inspired hoot, and an 80s dance-off between Gru and Bratt keeps silly going long enough for a decent payoff.

But again, while the latest Despicable Me will satisfy the kids with its frenetic zaniness and give the parents some escapist smiles, it might raise a question once part 4 comes calling.

“Which one had the twin brother again?”

Subscribe in a reader
← Mr. and Mrs. Vegas
Wolf in the Hen House →
Scroll Up