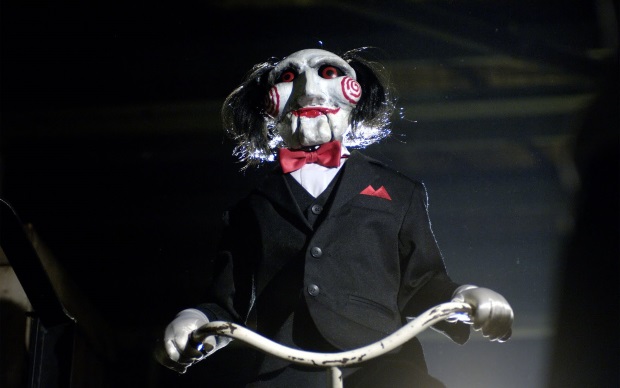 It’s Halloween, and after a seven year absence, Jigsaw is back with more evil tricks in store for some unrepentant sinners.

But is it the real Jigsaw, back from the dead? Or maybe just a fanatical copycat?

And can you, after 15-20 minutes of the movie Jigsaw, keep your mind from wandering away to that viral video of the guy trying to live with tiny Jigsaw for a roommate?

Come on, that video’s pretty funny.

After six sequels to the over-achieving original, the Spierig Brothers (Daybreakers, Predestination) attempt to revive the franchise with a suspense-free mystery of ridiculousness that confuses close ups of mutilated body parts with actual scares.

Those dead bodies are turning up with Jigsaw calling cards carved in conspicuous places, and the local detective (Callum Keith Rennie) naturally assumes it’s a copycat, as the infamous killer has been dead for ten years. The cop’s suspicions soon fall on a medical examiner (Hannah Emily Anderson), despite the objections of her supervisor (Matt Passmore), while somewhere on a remote farm more sinners are begging for release from deadly puzzle games.

Writers Josh Stolberg and (let’s just call him Dr.) Pete Goldfinger know you’d like a twist ending so give them credit, they come up with a pretty decent one. But ultimately, that just calls attention to the faint glimmer of hope this project had before it wilted under warmed-over ideas well past their prime.