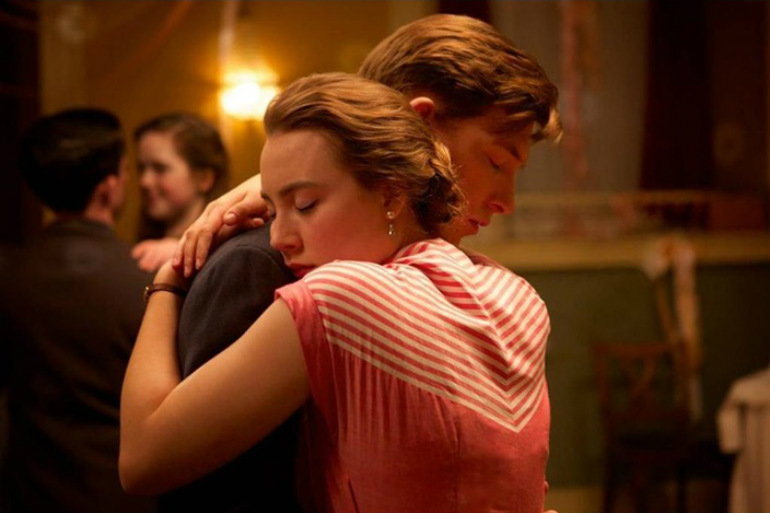 Intimate but universal, heartbreaking but hopeful, Brooklyn is a rich, wonderful tale of a young woman learning about life and love.

In the early 1950s, young Eilis (Saoirse Ronan) lives with her mother and sister in County Wexford, Ireland, but has dreams across the pond. Through connections with a helpful priest in New York, Eilis scores her boat ride, plus a room and a job, too, because, as Father Flood (Jim Broadbent) says, “We need Irish girls in Brooklyn.”

She lands at the boarding house of Mrs. Kehoe (Julie Walters, gleefully stealing scenes) and does her best to take social cues from her older housemates. Nightly dinners become downright hilarious, as Mrs. Kehoe scolds her girls over everything from overall giddiness to discussing “the Lord and stockings” at the dinner table. Priceless.

Suffering through crippling homesickness, Eilis perks up when she meets Tony, a young Italian who eventually takes Eilis home to a pretty funny family dinner of his own. The romance grows serious, but Eilis is called home for a family emergency, begins spending time with proper Irish boy Jim (Domhnall Gleason), and suddenly a choice is in Eilis’s future.

Writer Nick Hornby adapts Colm Toibin’s novel with wit and grace. He’s shown skill with coming-of-age stories before (About a Boy, An Education), but here he seems to relish fleshing out a character who’s taking control of her life in an era when the options for young women were more limited.

Irish director John Crowley (Closed Circuit, Boy A) does some relishing of his own, gorgeously framing his homeland, and then subtly changing color saturation and shot selection to mirror Eilis’s personal journey.

The entire cast gels as a stellar ensemble, but it is the sublime work of Ronan that pierces your heart. A New York native who was raised in Ireland, Ronan embodies Eilis from the inside out, and her character’s growth is never less than authentic and gently touching. Crowley knows it, regularly framing Ronan in picturesque glamour close-ups that his star holds with ease.

A luminous story of love, home, family and commitment that will lift you to another time and place, Brooklyn is a near perfect non-holiday film for the holiday season.

And if you’re Irish?

Well, you may find a new Christmas tradition.