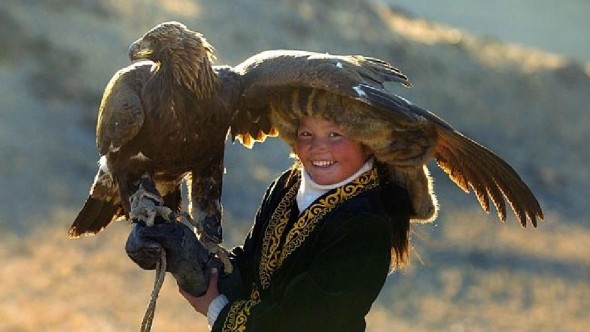 The documentary opens on a man standing on a snowy ridge. With him are three animals: a horse, a goat, and an eagle. The man sacrifices the goat, sets the eagle free, and then slowly trots into the distance on the back of his horse. Cut to a school classroom, where we find 13 year old Aisholpan in braids.

Director Otto Bell deftly handles his Mongolian setting with equal care to the rich history, steeped in tradition and the modern life that the people now lead. He never patronizes the culture – a nasty habit of film makers delving into a new setting. Nomads, how quaint! Traditional regalia, how mystic! Instead, Bell simply shows life as it is today, a culmination of everything that came before.

Aisholpan is a young girl who boards at school during the week, and goes home on the weekends. She likes giggling with her friends, helping her dad with the family livestock, and wants to be an eagle hunter. A woman has never been an eagle hunter before, let alone a girl, but this doesn’t seem to phase Aisholpan.

There are, however, many old men who have quite a few grievances with a woman becoming an eagle hunter. “Who would make the tea?” “Women are too weak,” and “She’ll have to get married eventually.”

It’s a great use of the “talking heads” trope of documentaries. A series of men sitting in a tent, talking about how women can’t and shouldn’t hunt. Meanwhile, Aisholpan is doing just that.

Bell produces a film with a clear narrative and story arc, but the tale never stops feeling organic. The style of the film seems to shift seemlessly with need. Distant contemplative shots are evenly mixed with tight close-ups. Sometimes an eagle’s eye view shows off the vast landscapes. Sometimes the camera is literally strapped to an eagle. This ever-changing style, fluid to capture each moment at its best, suits the world Aisholpan lives in.

One of the best shots of the film is not a beautiful snowy mountain or a dramatic slow motion shot of an eagle in flight. It’s Aisholpan herself, having just fed her eaglet bloody, raw meat, now painting her sister’s nails a shade of purple. The eaglet sits beside them, on a stump, while the two girls chatter away. Aisholpan’s world is not just about dualities, but multitudes. Her desire to become an eagle huntress is not just an affront to the men who uphold the noble sport today, but all the generations that came before them.

Aisholpan never seems too threatened by the grumblings of old men, though. In fact she hardly raises the matter. She simply wants to be an eagle hunter like her father, and her father’s father. Because her father and grandfather support her, she imagines few other obstacles. The most inspiring bit is, becoming an eagle hunter is not Aisholpan’s highest aspiration, it’s just what she wants to do right now. When she grows up, she wants to be a doctor.

And I’m sure she’ll be a great one.