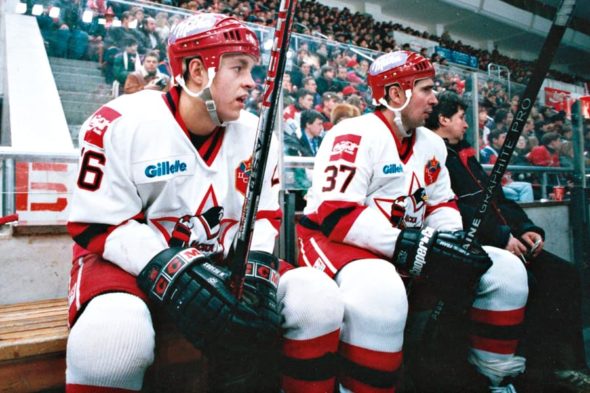 It’s been 35 years since Ivan Drago tried to break Rocky Balboa. While the fictional Italian Stallion may have prevailed against his Russian foe, the Americans at the heart of Red Penguins weren’t so lucky in their experience with our former Cold War nemesis.

After the fall of the Soviet Union, the famous Red Army hockey team found itself struggling to find funding. Pittsburgh Penguins co-owner Howard Baldwin thought it would be interesting to invest in the team as a way to funnel great Russian players to his own NHL club. With marketing guru Steve Warsaw acting as the man on the ground in Russia, the new American investors sought to navigate their way through an unfamiliar culture that was tasting the free market for the first time.

Director Gabe Polsky dives right into the absurdity of these Americans thinking they could immediately saunter into the former USSR. Baldwin and Warsaw’s eccentricities certainly caught their Russian partners off-guard, but also led the two to be unequivocally naive about many things Russian. The film’s early playfulness is fun and entertaining but also feels like a warning to the audience: a warning that the American investors never fully saw.

At times, Red Penguins feels like a documentary version of a Coen Brothers film. It’s hard not to laugh at the darkly comic situations Warsaw finds himself dealing with. Whether it be a beer- guzzling bear biting off the finger of a drunk employee, or a spy for the Russian mob that took up residence in Warsaw’s office. Anton Chigurh would feel right at home.

More than anything, Red Penguins is a cautionary tale about American overreach. Howard Baldwin wasn’t the first American businessman to foolishly believe that he could march into Russia and woo the former communists with his business savvy. Even the backing of the Disney empire couldn’t solidify a positive outcome.

While not coming together as a definitive hockey documentary, Red Penguins offers a unique look at a transitional time in the former Soviet Union. The beer-guzzling bears are just icing on the cake.