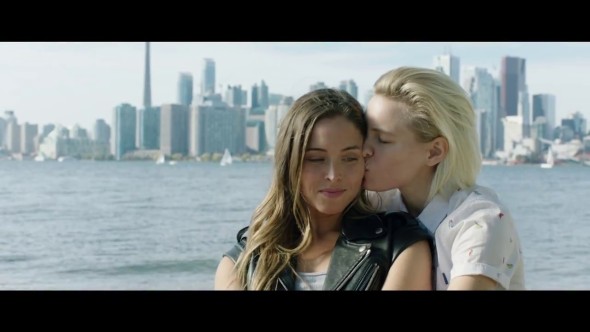 In a world where thin, beautiful, braless women look hot at work, stare longingly at each other and writhe sensually across the screen, are we supposed to see art where art is not just because Below Her Mouth is a film made by and (ostensibly) for women?

Writer Stephanie Fabrizi and director April Mullen – with an entirely female crew – bring to life the threadbare tale of an uptight good girl whose wild side is ignited by a chance encounter with a bad boy.

The fact that the bad boy is female is beside the point.

No, unfortunately, it is the only point.

Dallas and Jasmine – I swear to God, those are their names – are stiffly played by Erika Linder and Natalie Krill, respectively. Both cut impressive figures and are clearly comfortable with nudity.

There’s a reason for that.

Below Her Mouth is bound to garner comparisons to Abdellatif Kechiche’s Blue Is the Warmest Color – to its terminal detriment. Though Blue has its flaws, it tells a powerful story very well and boasts utterly brilliant performances. And, like Alain Guiraudie’s equally sexually graphic Stranger by the Lake, Blue’s vivid – almost exhausting- carnality supports the narrative.

Below Her Mouth strings together almost enough narrative to frame a dozen or two sex scenes.

Should she be applauded for bringing an entirely female-made film to our theaters?

No. Because the movie sucks.