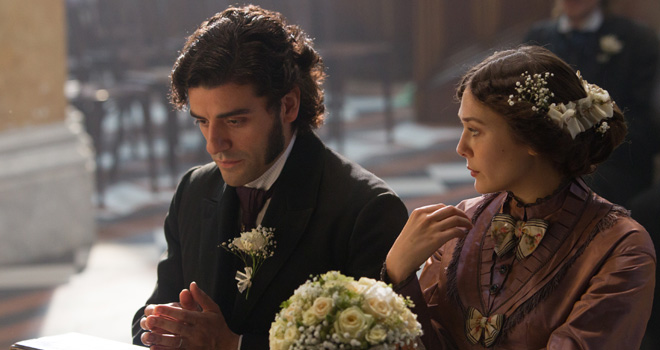 To put it mildly, the story at the heart of In Secret has staying power.

It’s the latest telling of Therese Raquin, a novel by Emile Zola that has seen countless adaptations since its debut in 1867. The classic tale of lust, betrayal and murder has seen big and small screen productions, live stagings, and been sampled in a range of films, ranging from the noir staple The Postman Always Rings Twice to the Korean vampire flick Thirst.

Elizabeth Olsen is Therese, who is stuck in a passionless marriage to Camille (Tom Felton), her sickly first cousin. They live with Camille’s doting mother Madame Raquin (Jessica Lange) in Paris, above the small shop she owns and Therese helps to keep running.

Camille brings his old friend Laurent (Oscar Isaac) home to visit, which ignites the long-repressed passions in Therese. Soon, she and Laurent are stealing every possible moment for bouts of bodice-ripping, which eventually leads to the pair imaging how nice it would be if Camille were to turn up dead,

Stratton, in his feature debut, is effective at setting the period, and the mood. The entire affair is laced with desperation, both before and after the murderous deed, and Stratton is able to differentiate between the shifting motivations of the characters.

His sublime cast is a huge help. Olsen continues to prove gifted at conveying much with the slightest of glances, and Isaac, fresh from his triumph in Inside LLewyn Davis, easily conveys Laurent’s penchant for blindly following his impulses.

Felton may be the biggest surprise. Since originating the Draco Malfoy role in the Harry Potter series, Felton has shown an impressive growth, and here he deftly gives Camille the dim-witted vulnerability which makes him an easy mark for,the scheming lovers.

And Lange? Well at this point, what can you say? She’s delicious, digging into a role which she makes even more effective once her character is forced to rely on her son’s killers for survival. Lange has been doing some of the best work of her storied career recently, people, take note!

In Secret is a pure, old-fashioned Gothic thriller, one that purposely takes a detached approach to the scheming. Those looking for a deep psychological look within the characters won’t get it.

You will get a filmmaker determined to stay as true as possible to the intent of its source material, and a cast talented enough to bring that vision to a satisfying fruition.