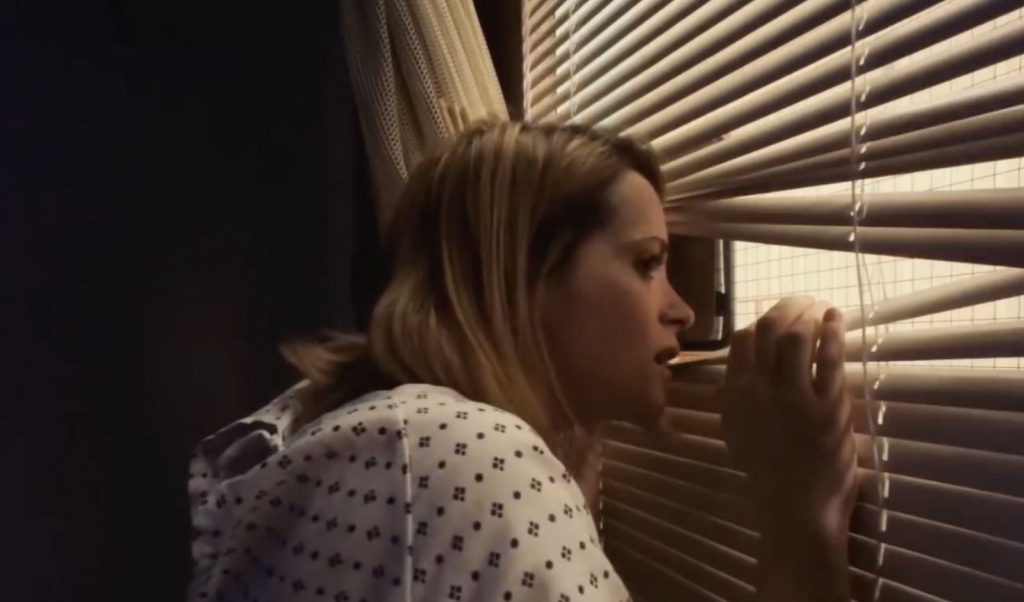 Having recently moved 400 miles from Boston to suburban Pennsylvania to escape her stalker, she begins seeing him everywhere. Shaken and without a support network, she visits an insurance-approved therapist in a nearby clinic.

She’s grateful for the ear, but upon completing her paperwork Sawyer finds that, due to the therapist’s diagnosis that Sawyer is a danger to herself or others, she is held involuntarily for 24 hours.

After punching an orderly she mistakes for her stalker, that 24 hours turns into one week. And now she’s convinced that the new orderly George is, in fact, her stalker David (Joshua Leonard—you know, doomed Josh from The Blair Witch Project!).

There a number of factors hard at work in Unsane‘s brisk 98-minute ride. Director Steven Soderbergh, by way of Jonathan Bernstein and James Greer’s script, lays bare some terrifying facts about our privatized mental health industry.

He structures this critique with a somewhat traditional is-she-or-isn’t-she-crazy storyline. Anyone who watches much horror will recognize that uneasy line: you may be here against your will, but that doesn’t mean you shouldn’t be here.

Part of the film’s success is Soderbergh’s ability to put you in Sawyer’s headspace, which he does primarily through the use of iPhone 7. He claims to have filmed entirely on these phones, and whether or not that’s true, the shallow, oversaturated aesthetic creates the sense of delusion.

Foy’s performance is refreshingly unpleasant. Sawyer is tough to like, but she’s damaged and savvy in a way that feels authentic.

Soderbergh relies on familiar tropes to say something relevant and in doing so creates a tidy, satisfying thriller.