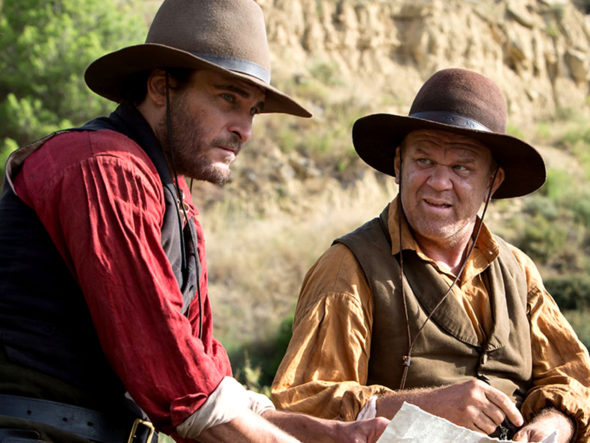 How many Jacques Audiard films have you seen? You should probably see all of them, including his latest, The Sisters Brothers.

We open with Charlie and Eli Sisters (Joaquin Phoenix and John C. Reilly, respectively), two gunslingers for hire on the job. Their next big gig assigned by The Commodore (Rutger Hauer) will put them on the trail of a prospector in the 1850s West.

Phoenix, who is having a banner year even for him (if you haven’t already seen You Were Never Really Here and Don’t Worry, He Won’t Get Far on Foot, please do), plays the loose cannon brother. Making trouble is in his blood—a fact his brother is trying to forget.

Eli longs for something better for himself, something settled and adult. But he is bound to his brother and their friction bristles with the bonds and bondage of family. Reilly’s conflicted tenderness and responsibility mingle with a genuine longing that offers an emotional center for the film.

A few days’ ride ahead of the brothers is the tracker The Commodore hired to assist in the deed. Jake Gyllenhaal’s John Morris is an observer and a loner, a man who believes in his own intellect but is willfully blind to the consequences of his career choice—until he befriends the object of The Commodore’s interest, a chemist with ideals and a compound that seriously simplifies the act of finding gold.

Good-natured chemist Hermann Kermit Warm is played by Riz Ahmed (also having quite a year, back to back this week with his strong turn in the overly criticized Venom). He and Gyllenhaal remind you of the amazing chemistry they shared in 2014’s Nightcrawler. Though their characters couldn’t be more different this time around, the two actors again share a natural rapport that makes you a believer.

Peppered with fascinating images, intriguing side characters and the lonesome beauty that infects the best Westerns, Audiard’s film embraces a genre without bending to expectations. Does it all come down to daddy issues? Yes, but the longing for camaraderie and the quest for redemption has rarely been this charming.

The film meanders intentionally, serving the rugged outdoorsiness required of its genre, but relies on its four leads to craft fascinating characters whose relationships and destinies infect you with a hope often lacking in Westerns.

← The Screening Room: Shocks and Awes
The Good, the Bad, and the Hungry →
Scroll Up