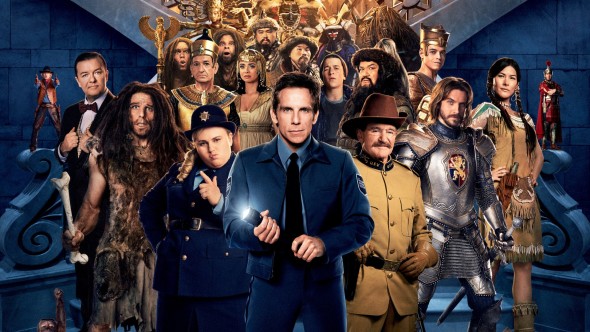 Some trilogies come to a close with dragons, gold, tiny heroes, legendary foes and Ben Stiller. Wait, what?

Yes, though it may have flown under your radar, Stiller’s Night at the Museum series comes to a close with its third installment. Night at the Museum: Secret of the Tomb completes the arc begun in 2006 when Stiller’s night watchman Larry Daly learned that, after sundown, the exhibits at New York’s Museum of Natural History come to life. (So basically, Toy Story in a museum setting.)

In 2009, Larry and his crew broke into the Smithsonian. This time around, when the golden tablet that reanimates the exhibits night after night begins to mysteriously corrode, the team heads to a London museum to repair the device and save everyone.

Truth be told, this is a series that has been sweet, imaginative but disposable from its inception.

Much fault lies with the series’ director Shawn Levy (Real Steel, Big Fat Liar), an unrepentant purveyor of anemic family fun. The Museum trilogy represents the best of his body of work. Still, he substitutes a busy screen and abundance of characters for actual pacing and energy.

The talent – Stiller, Robin Williams, Owen Wilson, Steve Coogan and others – creates likeable, rascally characters, and most draw at least a chuckle or two during the adventure.

We’re to learn that life is about letting go as Larry recognizes his son’s impending manhood, though nothing feels genuine or heartfelt. But why start now? When Levy expanded Milan Trenc’s educational children’s book to a feature film, he borrowed a concept and lengthened it with some inside jokes, some cheap theatrics, and lots of dated gags, but little in the way of heart. Its subsequent sequels rehash the same basic concepts in new museums, and because of an underlying lack of creativity and abundance of coasting on the comic timing of the cast, the sequels have all been about as entertaining as the original.

The concluding chapter offers some coincidental tear jerking as Robin Williams delivers lines more moving because of their real-life context than their importance to the film. There are some other mildly amusing, well placed gags and gimmicks, and an awful lot of rehashing. If you and yours enjoyed the first two installments, the third promises more of exactly the same. The rest of us can overlook the third episode, exactly as we did the first two.

← Counting Down the Women of Film, 2014
Trading Olympic for Oscar Gold →
Scroll Up