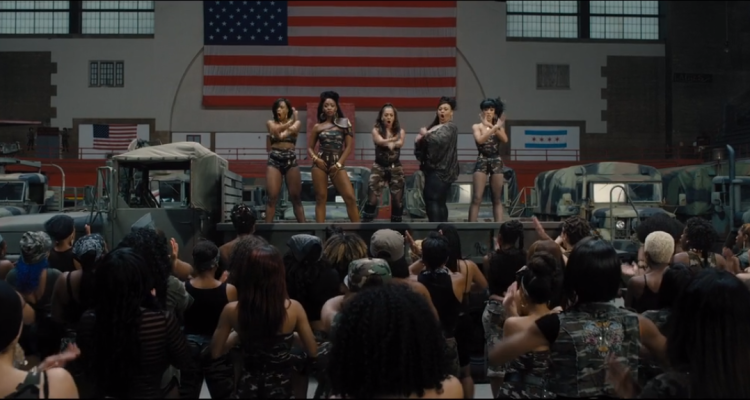 So sorry to interrupt coverage of the latest shooting rampage, but Spike Lee wants to get in your face again.

Over 25 years since he delivered a generational wake up call with Do the Right Thing, Lee is back in the alarm business with Chi-Raq, a smart, stylish fable that pleads for peace in the land of the gun.

Lee and co-writer Kevin Willmott have relocated the Ancient Greek play Lysistrata to inner city Chicago, where a staggering number of murders has earned the city a new moniker: “Chi-Raq.” Rival gangs (Trojans and Spartans, natch) kill each other at will, and when a stray bullet finds another innocent child, the fed up Lysistrata (an electric Teyonah Parris) decides to reach out across gang lines for a solution.

The neighborhood women take a solemn pledge to “Lock it up!” and deny their men sex until they agree to a peace treaty. The men, including Trojan leader “Cyclops” (Wesley Snipes), and aspiring rapper/devoted Spartan “Chi-Raq” (Nick Cannon, impressive) don’t take the threat seriously, until the ladies dig in and take over a local armory.

As more and more women join the strike, the mayor gets involved and Operation Hot and Bothered is put in motion, with monster speakers blasting slow jams amid the battle cry of “Do your duty and give up the booty!”

Sure, Chi-Raq offers fast and funny social satire, except when it’s mad as hell. As in Do the Right Thing, characters often speak directly to the camera, and in keeping with the original play, much of the dialog is delivered through rhyming verse. Narrator Dolmedes (Samuel L. Jackson, demanding attention as only he can) updates us on just what is at stake while local pastor Father Mike (John Cusack) kicks ass and names names in a blistering sermon on racism, inequality and social justice.

Boasting an exuberant, combustible mix of style and outrage, Chi-Raq becomes a stirring cry for sanity from Spike Lee, as urgent and necessary as anything we’ve seen seen Raheem turned up his radio.