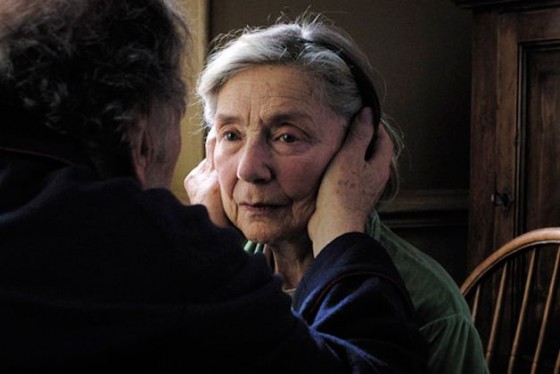 Amour – the sure winner February 24th in Oscar’s foreign language category – comes to the Drexel just in time for Valentine’s weekend. It is a love story, after all. The Notebook, however, it is not.

This French-language film is the handiwork of Michael Haneke, also nominated by the Academy for his efforts in writing and directing the film. Those unfamiliar with the filmmaker should look into his catalogue; he’s never made a film undeserving of multiple viewings.

Indeed, Amour is not even Haneke’s first masterpiece. (See: The White Ribbon. Seriously. You should definitely see the film The White Ribbon.) In fact, Amour is his second Golden Palm takeaway from Cannes, and his second Oscar nomination for Best Foreign Language Film. It’s his first nod for best film altogether, though. With Oscar leaving such brilliant movies as The Master and Moonrise Kingdom empty handed in the Best Picture nomination department, Amour has a lot to live up to.

Meticulous and unsentimental, Haneke seems an unusual helmsman for this tale of an elderly couple facing the devastating physical and emotional consequences of a stroke. In fact, he’s perfect. He sidesteps every inclination to be maudlin, melodramatic or sentimental and instead delivers a film as quietly devastating as it is beautiful.

The understatement and authenticity work together to detail a lived-in love, a livelong merging of the soul that transcends all other worldly entanglements. There is not a false note, not a single moment of sap or romanticism. There is much tenderness, though, and that’s what will demolish you.

Amour is a film like no other: an intimate, unsentimental portrait of aging, love and death. Who but Haneke has the nerve to pull that off?

2 thoughts on “The Notebook it Ain’t”