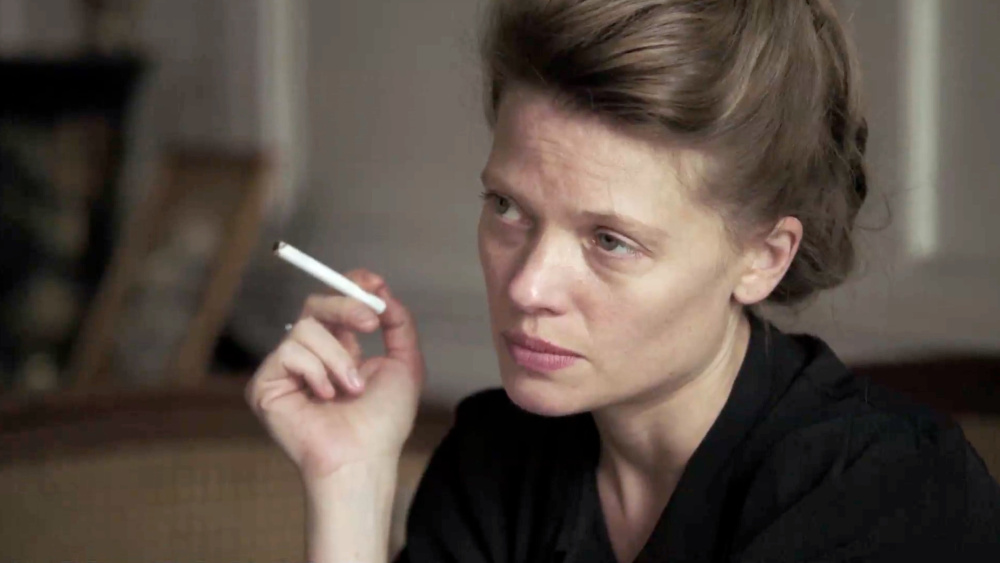 So a screenwriter, the president of France and a spy walk into a café… have you heard this one? If so, you might have read the book La Douleur (War: A Memoir for the English translation), an autobiography by Marguerite Duras based on diaries she allegedly wrote during World War II.

Duras rose to fame as a writer, garnering a screenplay nomination for the Alain Resnais-directed Hiroshima mon amour. That film’s novel treatment of memory and chronology echoes throughout Memoir of War, adapted from Duras’s book and directed by Emmanuel Finkiel.

Mélanie Thierry plays the film version of Marguerite, whose recollections span the waning days of Vichy France through the Liberation of Paris, the end of the war and the immediate aftermath of Europe reckoning with news of the Holocaust.

If this sounds like a lot of history to cover for one movie, it would be—except Marguerite’s reflections are unconcerned with straightforward chronology. Her diaries and narration compress time and memory into one long, all-consuming reverie for her captured husband, Robert (Emmanuel Bourdieu).

It makes for a deliberately disorienting experience, one that Finkiel pulls out a few tricks to heighten: there’s the nauseatingly atonal strings of the soundtrack, as oppressive as a horror score. But most effective is the way Marguerite’s memories of these monumental years unfold so frequently in claustrophobic interiors.

We get the entire moral arc of world war by way of smoky Parisian rooms. As the war winds down and Robert’s fate seems more and more dire, Marguerite retreats both mentally and physically. And we experience the two most triumphant moments—the Liberation of Paris and what should be another happy occasion after the war—through Marguerite’s furtive glances out the window, like gossamer filters keeping the reality of the world at large a step removed from ever being something she can attain herself.

It’s a demanding role, and it rests almost entirely on Thierry to hold everything together even as her character seems to slip in and out of time. She pulls off resolve with gusto, and even tempers it with a haunted uncertainty that feels completely natural as the enormity of the Holocaust becomes clear.

Memoir of War is a difficult film to get a handle on. The Resistance intrigue is discarded as quickly as it starts to take shape. The historical romance is mostly MacGuffin. And the war barely leaves the cafés, let alone the city.

The slipperiness is apt though. Marguerite’s memories are their own fog of war, and the author’s real-life diaries play coy with authenticity vs. artistic liberty. Finkiel pieces together a fitting adaptation, and if the parts never hold together long enough to say some cohesive whole, at least he can say he makes us feel something Marguerite would recognize.