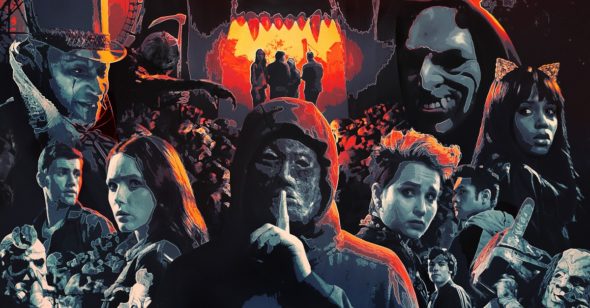 Hell Fest is not the first film to point out that it would be really dangerous if any of the masked meanies inside a Halloween haunt were, indeed, a murder-happy maniac. It’s not a bad premise, just not a new one.

Why so much groping, by the way? They aren’t that drunk, they have homes, none of them just got out of prison. That’s the thing about slashers: we’ve seen so, so, so many of them over the years that the cracks in the formula are gaping holes by this point.

Her friends are mainly over-the-top caricatures of humans, but there’s an almost believable camaraderie among them. Forsyth fares best, clumsily flirting with the equally awkward Gavin (Roby Attal) as their overdressed friends drink from flasks and tell us how very excited they are.

While a couple of the attractions are fun, the main problem with Hell Fest is that it is not scary. Not for a minute. Nor is it gory—for a film with an R rating, there’s almost no blood, absolutely no nudity and very few F-bombs. It’s as if they hoped for a PG13 rating, didn’t get one and now they’re stuck with a movie that can’t entertain the wee ones and won’t entertain adults.

They do have Tony Todd, though. When has that ever been a bad idea?

I know, October is basically here and you just want to find some new scary movies to put you in the mood. Dude, seriously, Halloween comes out in two weeks. Just hold your horses.

← The Judgement of Paris
Mythbuster →
Scroll Up