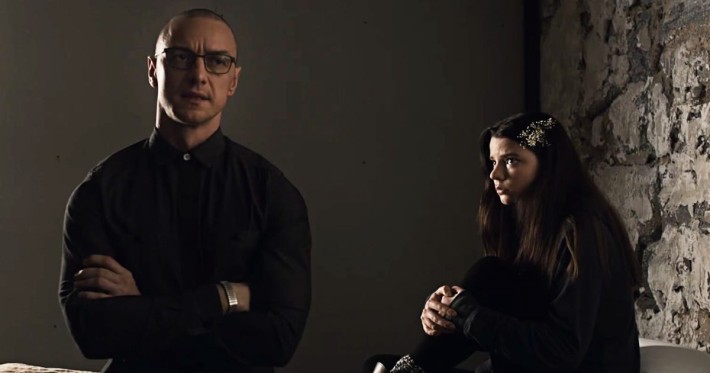 Yes, Split is the latest from writer/director M. Night Shyamalan, and no, you’ll never see it coming.

After years of misfires, Shyamalan got his groove back by scaling back two years ago with The Visit, an enjoyable bit of lightly scary fun that amounted to one giant misdirection. With Split, the director himself is the main misdirection, as his reputation pushes you to chase something that may not be there at all.

McAvoy is Kevin, a deeply troubled man harboring 23 distinct personalities and some increasingly chilling behavior. When he kidnaps the teenaged Casey (The Witch‘s Anya Taylor-Joy) and her two friends (Haley Lu Richardson, Jessica Suva), the girls are faced with constantly changing identities as they desperately seek an escape from their disorienting confines.

Meanwhile, one of Kevin’s personalities is making emergency appointments with his longtime therapist (Betty Buckley, nice to see you), only to show up and assure the Dr. everything is fine. She thinks otherwise, and she is right.

The split personality trope has been used to eye-rolling effect in enough films to be the perfect device for Shyamalan’s clever rope-a-dope. By often splitting the frame with intentional set designs and camera angles, or by letting full face closeups linger one extra beat, he reinforces the psychological creepiness without any excess bloodshed that would have soiled a PG-13 rating.

Still, it all might have gone for naught without McAvoy, who manages to make Kevin a sympathetic character while deftly dancing between identities, often in the same take. He’s a wonder to watch, and the solid support from Buckley and Taylor-Joy help keep the tension simmering through speedbumps in pacing and questionable flashbacks to Casey’s childhood.

Maybe the best case for this new Shyamalan surprise is the fact that even without the kicker, Split would hold up as a competent, emotionally disquieting thriller. But when you add that final reveal?